The ancient Armenian calendar had thirty named days in each month of the year.

Who needs mere numbers to mark the passage of time? And doesn’t the repetition of the names of the days of the week get boring after a while? The ancient Armenian calendar had names for everything – hours, days, and months.

While thirty-days-per-month and twelve-months-per-year used by ancient Armenians might sound familiar, a quick calculation will reveal that that amounts to 360 days in total. The extra period, five or six days, was the month of “avelyats” – “the extras”. Except for one or two numbered months, the other months were named after gods, such as the deity of fire – “Ahekan” – or such practical considerations as the harvest – “Kaghots”.

The names of the days, meanwhile, stuck to old gods, heroes, or natural objects. They included “Areg” and “Astghik”, which refer to the sun and Venus respectively, and “Masis” and “Aragats”, both still the names of mountains in and around Armenia. Names of hours went along with natural phenomena too, such as, roughly, “Dawn” (“Arshaluys”) or “Twilight” (“Mtatsyal”, literally “darkened”), or “Cock-crow” (“Havakhos”, literally “bird-call”).

Around the year 552 AD, a calendar reform took place, with the introduction of what is called the Armenian Era. This numbering system is still cited in the church context. The year 2014 AD, for example, would be 1461 in the Armenian Era. Counting up from 552, that would be 1462, actually – but when exactly the year changes over depends on which calendar system you are using: it doesn’t happen on the first of January in every case.

Over time, the Armenians came to adopt the seven-day week and the names of the twelve months familiar to us today. The days were in the past named after the planets or gods as they are in English (for example, “Sunday” or “Monday” again named for celestial objects, the sun and the moon).

But the modern Armenian language uses numbers for most days of the week. Monday, perhaps surprisingly for us today, is “the second of the week” (“Yerkoushapti”, or “Yergoushapti” in Western Armenian pronunciation). Why start the modern work week on the second day? Because it is Sunday when things are supposed to get going first. At least, that’s the Christian tradition. The name of that day in Armenian marks “The Day of the Lord” – “Kiraki” or “Giragi” in Eastern or Western Armenian (from the Greek word for “Lord”). 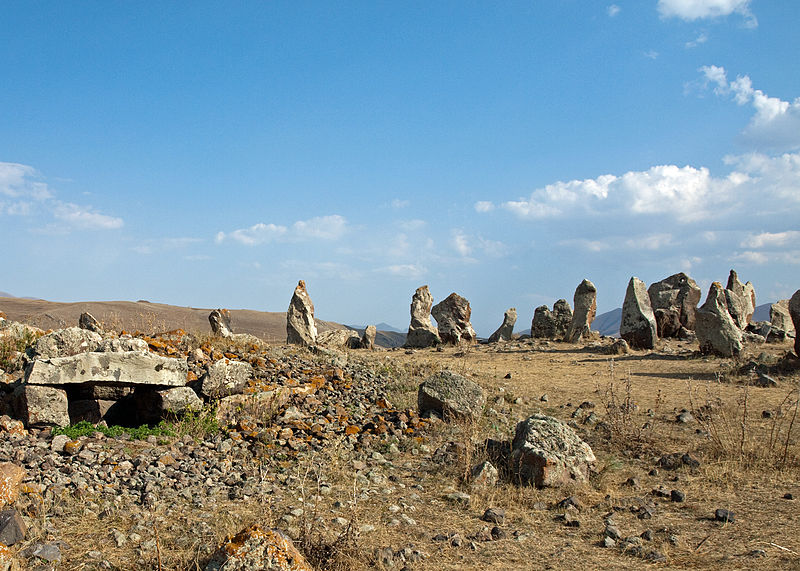 A vista from Karahunj, an ancient site in modern Armenia that is believed by some to be the remains of an astronomical observatory – who knows how the passage of time was calculated or what calendars were conceived here?