Armenians in the world of sport range from princes that took part in ancient Olympic games to modern world champions.

Sports and games have naturally long been a part of Armenian culture. Historical records in fact indicate two Armenian princes, later kings, to have participated in the original ancient Olympic games – Trdat III having won at wrestling during the 265th Olympics held in 281 AD, and Varazdat, who won the boxing event of the 291st Olympics, which took place in the year 385.

Armenians continued their athletic endeavours as the modern sports scene progressed over the past hundred years or so. There were organised clubs and groups devoted to various sporting pursuits in the Ottoman Empire. The very first representation of the Ottoman Empire in the modern Olympics – in Stockholm, in 1912 – took place with two Armenians under that country’s crescent and sickle banner. However, it was the flag of the USSR that was raised for the first Armenian Olympic medal winner – Hrant Shahinyan, a Soviet champion in gymnastics, who won during the 1952 Olympics held in Helsinki. Wrestling and weightlifting are two other sports in which Armenians have particularly excelled on the world stage and at the Olympics over the years.

Certainly Armenia’s place in international events ranks highest in the world of chess, ever since Soviet times, when Tigran Petrosian became a household name in the 1960s. Levon Aronian is a celebrity in the Republic of Armenia today in the same vein.

But, of course, it is football (soccer) which has the biggest popular following. The Ararat Football Club is still regarded highly in the country for its 1973 Soviet championship win. Armenia’s standing today in the challenging European football arena has steadily increased over the past few years, although the country has not made it to a World Cup yet. Players like Henrikh Mkhitaryan (whose Facebook page garners well over a million likes), Yura Movsisyan, and Edgar Manucharyan, among others, serve as role models for a new generation of young Armenians today, while Youri Djorkaeff, who played for France – including to victory during the 1998 World Cup – is a prime example of a Diasporan Armenian with both feet on the sports field. The passing in 2014 of Aleksan Dadyan was met with much grief in Turkey; he was a celebrated goalkeeper at the club football level in that country, and a friend of Prime Minister Erdoğan, who himself used to be a footballer.

Other examples from the Diaspora include the well-known Argentine-Armenian tennis player, David Nalbandian, alongside such a big name in the world of tennis as Andre Agassi. The Armenian-American community would also find the names Steve Sarkisian and Jerry Tarkanian familiar as coaches of American football and basketball respectively.

Diaspora communities often feature athletic groups involved in various sports or martial arts, and they tend to hold local or regional tournaments on a regular basis. Such activities were taken to a whole new level with Armenian independence in 1991, after which the Pan-Armenian Games were organised. They were held for the first time in 1999, and have been a regular occurrence since, with thousands of Armenian athletes pitting themselves against each other in basketball, football, swimming, chess, and other sports, as representatives of their towns and cities in Armenia or as Diaspora communities from around the world. The very first Pan-Armenian Winter Games took place in February-March, 2014. 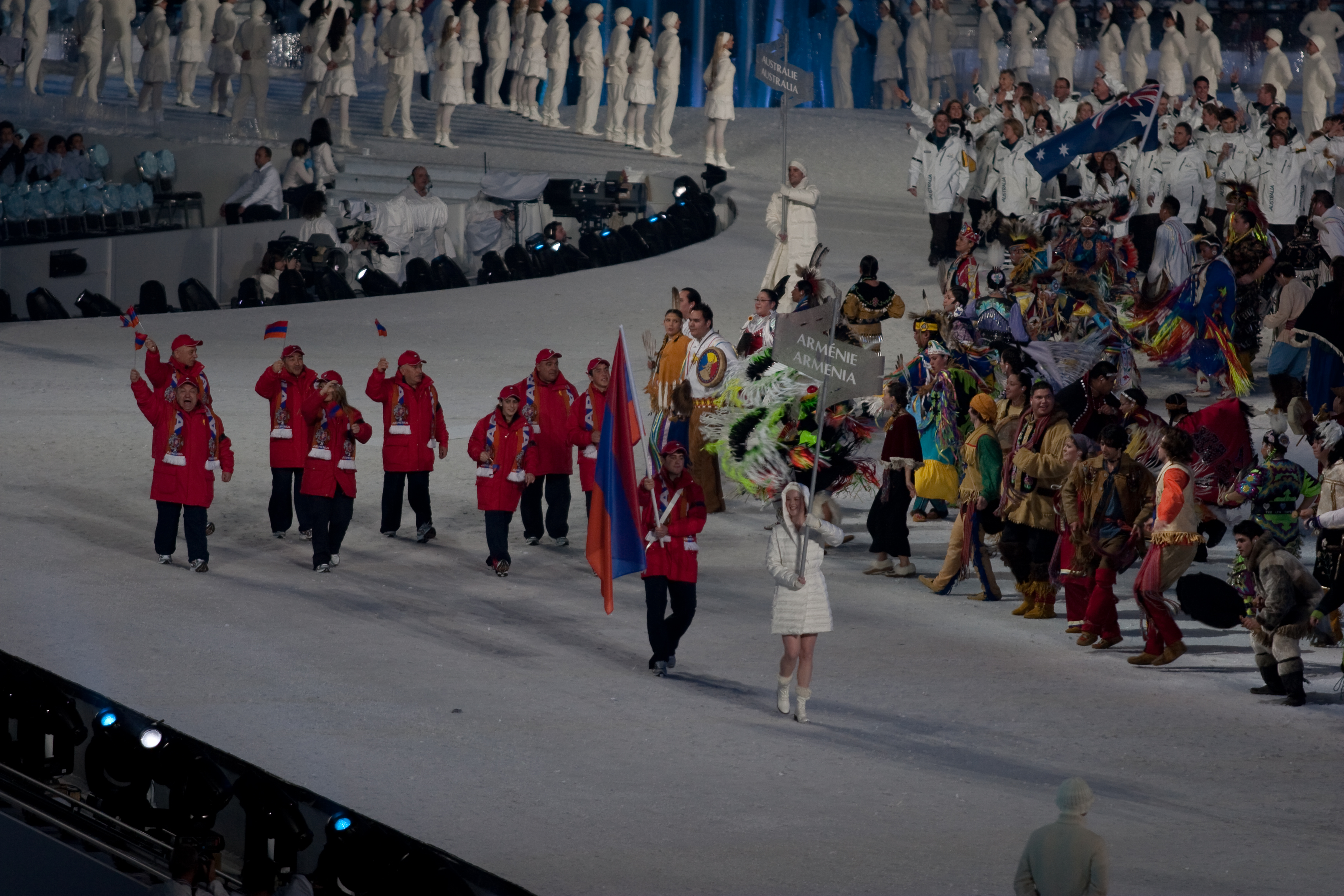 Armenia at the 2010 Winter Olympics opening ceremony, in Vancouver, Canada.