The duduk and the oud are two instruments that form part of the rich Armenian musical tradition.

The legacy of Armenian music goes way, way back, and its richness includes genres that range from the liturgical or religious to the popular and modern. Traditional instruments include types of drums such as the dhol or doumbek, string instruments like the kanun and kamancha, various members of the woodwind family – the shvee and zourna, for example – and many others. Two of the most well-known folk music instruments among Armenians are the duduk and the oud.

The duduk is easily the most recognisable Armenian musical instrument, featuring perhaps more often in funerals, due to its melancholy tone, than in weddings, although it is also used during celebrations or for dances. With different variations and names, it is used throughout the region – the Balkans, the Middle East, the Caucasus, and Central Asia – but it is considered to be a national symbol in particular by the Armenians, a status that was cemented with UNESCO recognition in the Representative List of the Intangible Cultural Heritage of Humanity in 2008.

The duduk’s more traditional name is “tsiranapogh” in Armenian (“dziranapogh” in Western Armenian pronunciation), or “apricot-horn”, referring to the use of wood from the apricot tree in making this wind instrument. Duduk players often perform in pairs, with one holding the same note as the background to the melody played by the other. A special breathing technique is used to continue playing the same note without any pause.

Jivan Gasparyan is probably the most famous Armenian duduk virtuoso in the world today; his music featured, among elsewhere, in the 2000 movie Gladiator – an indication of how the duduk has been making its mark in Hollywood in recent years. The oud is likewise a Middle Eastern instrument – similar to the lute or to the guitar, but with a wider, rounder body, and six pairs of strings – that has a special place in the Armenian tradition, and even more so in the Armenian-American tradition. The Ottoman Armenians who made their way across the Atlantic took this part of their heritage very seriously, while many left behind, such as Udi Hrant and Aram Dikran, made big names for themselves in the world of Turkish and Kurdish music.

Udi Hrant’s story is particularly celebrated. He was born Hrant Kenkulian in 1901 not too far from the capital of the Ottoman Empire, losing his eyesight as an infant a few days later. The family survived the Armenian Genocide, living later in Istanbul, where a blind Hrant made ends meet playing the oud, which he had learnt to master during his childhood and youth, carrying on the tradition that other Armenian teachers had passed on to him. His big break came in 1950, when a benefactor sponsored him to travel to the United States to receive treatment for his eyes. Although he remained blind, Udi Hrant proved a hit, performing and teaching in the decades that followed in America, Europe, and back in Turkey, where he featured regularly on Istanbul Radio. He died in 1978.

Armenian-Americans in particular feature among the big names of oud players today, such as Richard Hagopian (who studied under Udi Hrant), John Berberian, Ara Dinkjian, John Bilezikjian, and others. 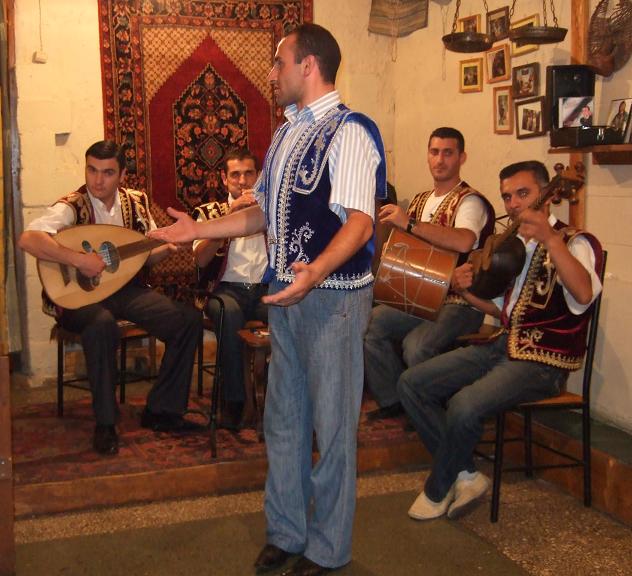 A group of Armenian folk musicians playing the duduk, oud, and other instruments.

By Chaojoker (Own work) [CC-BY-SA-3.0 or GFDL], via Wikimedia Commons.