Armenia and the Environment

This week, 100 Years, 100 Facts would like to give a shout-out to a few organisations (of many) that are involved with the ecology.

http://www.armeniatree.org/
Facebook: https://www.facebook.com/armeniatree
Armenia Tree Project is quite high on the list of Armenian environmental establishments. Based in the Boston area and Yerevan, ATP got going in 1994 through the vision and efforts of Carolyn Mugar. Besides reforestation – over four MILLION trees planted in Armenia over the past twenty years – Armenia Tree Project also runs community development and poverty reduction programs, such as sustainable micro-enterprise nurseries, while carrying out environmental education and advocacy work in the country as well.

http://www.armenia-environment.org/
Facebook: https://www.facebook.com/ArmenianEnvironmentalNetwork
Advocacy and awareness is also at the heart of the second organisation to be featured on this post. The Armenian Environmental Network has been around since 2007, expanding to a few chapters across the United States and with a presence, of course, in Yerevan. From volunteer work involving panel discussions in the Diaspora, AEN has taken on funded projects such as waste management studies in two regions of Armenia.

Green: Area where AEN currently has work in progress
Yellow: Area where AEN hopes to work in the future
Red: Environmental hot spot which AEN would like to bring to the attention to the Armenian Diaspora 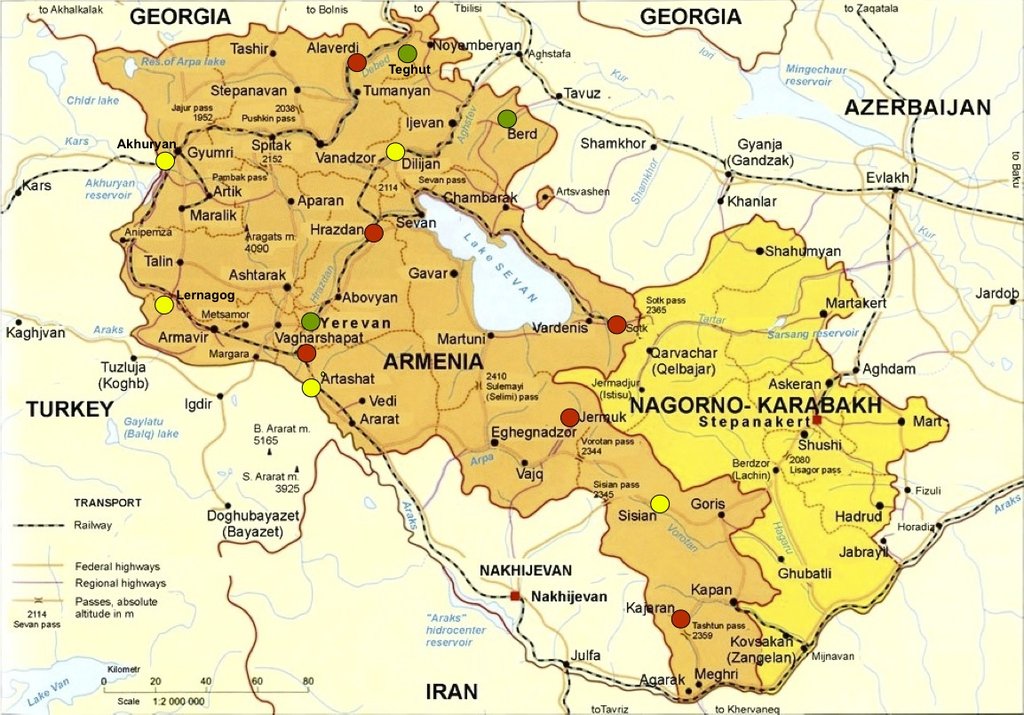 -Foundation for the Preservation of Wildlife and Cultural Assets

http://www.fpwc.org/
Facebook: https://www.facebook.com/pages/Foundation-for-the-Preservation-of-Wildlife-and-Cultural-Assets/371360779689461
Shifting over from the Diaspora, the Foundation for the Preservation of Wildlife and Cultural Assets is among the most active home-grown environmental groups in Armenia itself. Since 2002, FPWC has worked “to raise local and international awareness for the preservation of Armenia’s unique natural heritage”. The SunChild (Arevorti) series of projects aims in particular at environmental involvement for the young, with clubs, courses, festivals, even films and TV shows reaching out to – and helping form! – the latest eco-friendly generation in the homeland.

“The film presents two newly opened rural B&Bs in Urtsadzor, a village nearby FPWC’s Caucasus Wildlife Refuge. Supporting villagers to gain additional income from rural ecotourism is part of FPWC’s effort to combine nature conservation and community development. The renovation of the B&Bs has been funded by the Norwegian Embassy Small Grant Program.”