One of the oldest works written in Georgian is about an Armenian.

There are probably very few peoples on this planet who can claim to be as ancient neighbours as the Armenians and the Georgians (although one may also want to include the Persians for good measure). These two identities are so old, in fact, that not only do they have separate, unique names for their own selves – “Armenia” is “Hayastan” in Armenian, “Georgia” is “Sakartvelo” in Georgian – but they also have special names for each other: the Armenians call Georgia “Vrastan” and the Georgians call Armenia “Somkheti”.

It is difficult to pin-point a specific origin of the Armenian presence in Georgia. Mentions of connections date from chronicles quite far back. One of the very first written works in the Georgian language, in fact, dating from the 5th century, is about the martyrdom of Shushanik, an Armenian princess married to a Georgian nobleman who refused to give up her Christian faith to ingratiate a Persian overlord.

A large wave of movement of Armenians towards Georgia took place during the 12th and 13th centuries, when Georgian and Armenian forces fought off Seljuk Turkish troops. The region prospered at that time, during the reigns of the Georgian rulers David the Builder and Tamar, his great-granddaughter. This Golden Age of the Georgian people took place with the Bagrationi dynasty on the throne, itself related to the Armenian Bagratuni (or Bagratid) line, the last independent kings within the historical Armenian homeland.

The Armenians continued to reside as subjects of the Georgian court. The kingdom maintained a degree of autonomy until 1801, when it was absorbed into an expanding Russia, which soon staked its claim on what became Armenia and Azerbaijan as well. Thus, it can be said that Georgia and a part of the Armenian people have shared a history of being within the same country – Tsarist Russia and the USSR – through a majority of the past two hundred years.

The 19th century up to the First World War was a period of immense activity for the Armenians of Georgia, who ended up forming a very substantial percentage of the population of Tbilisi (or Tiflis). Almost all major achievements of Armenian life in general in that era took place either in that city or in the capital of the neighbouring Ottoman Empire, Constantinople. Big trading families took root, important schools were established, and influential works in the arts and culture were first published or performed in what is the capital of Georgia today.

The Bolshevik Revolution came at a chaotic time in 1917, coinciding with the Armenian Genocide as it did. One segment of the Armenian national movement of the preceding decades had gotten its start in Tbilisi, and the 1918 Republic of Armenia was declared from that city, the government moving on to Yerevan only later. An element of those highly unstable years included armed conflict between Armenia and Georgia, both states lasting just a couple of years, before Sovietisation took over.

The Armenian population of Georgia dwindled during the years of the USSR. Certainly there was no freedom to undertake activities of national interest in the same way, although such individuals as Aram Khachaturian and Sergey Parajanov – both of Tbilisi-Armenian background – made a name for themselves on the national and international stage in music and film respectively.

There have been some controversies in Armenian life in Georgia since the collapse of the Soviet Union, with nationalism overshadowing freedom of culture, religion, and education. Armenians can be found all over the country, and there are some disputes in various places with regards to property, especially claims on church buildings. A great many Armenian churches and cemeteries were destroyed during Soviet times, but some have also fallen victim or have been neglected since 1991 as well. Such issues have also often been raised when it comes to Armenians who form a substantial proportion of the population of Samtskhe-Javakheti, a region in south-western Georgia bordering Armenia (known in Armenian as “Javakhk”). The territorial disputes of the Caucasus, and differing positions of the governments in Yerevan and Tbilisi on them, also form sources of disagreement.

Nevertheless, Armenians continue to be a part of society in Georgia, and largely visible to the general population. There have been rather significant policy shifts in recent years with regards to encouraging cosmopolitanism and multi-culturalism in Georgia, moves that have not only been of general benefit to the Armenians of that country, but have also at times served to form a bridge – despite the ongoing dispute over Nagorno-Karabakh – between Armenians and Azerbaijanis, who also constitute a minority in Georgia. The Armenians of Georgia have taken on what can be called traditional Diasporan activities over the past decade or so, including the maintenance of churches, schools, publications, and even Armenian Genocide commemorations.

Check out our previous entries on Sayat-Nova and on Alexander Mantashev – two celebrated Armenians of Georgia. Stay tuned for a future fact on Aram Khachatryan. 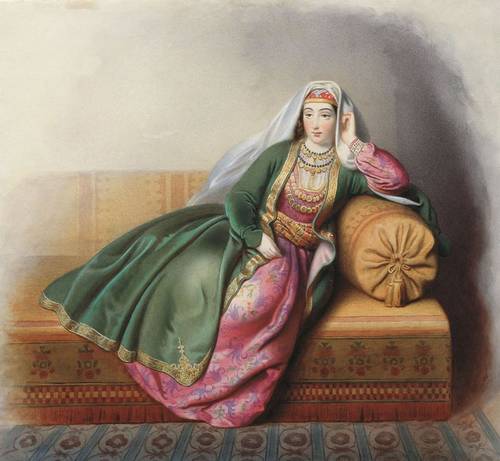 A 19th-century drawing of a Tbilisi-Armenian woman