The typical image of the wandering minstrel of Europe in the Middle Ages – the itinerant bard, going from village to village, singing in the Provençal language with his lyre for his supper – can be said to meet its match in Sayat Nova, a multi-lingual Armenian troubador who was a staple in the court of the King of Georgia in the 18th century.

Sayat Nova (born Harutyun Sayatyan or Sayakyan; died in 1795) is remembered today as the most celebrated gousan or ashough/ashik, the folk musicians whose works resonated across the highlands between the Black Sea and the Caspian Sea for centuries. The tradition lives on, as there is still music written with such traditional instruments as the kamancha in mind and at hand, an instrument to which Sayat Nova himself dedicated a song.

A lot of his works sung in Armenian today centre on romance. But that’s not the only theme of his works, and it is certainly not the only language in which Sayat Nova wrote and sang. Spending most of his life in Tiflis (Tbilisi), Georgian was also one of his native languages, as was Azerbaijani Turkish, perhaps Persian as well, or at least influences from that language. Sayat Nova truly bore the multi-cultural environment of the region generally of the time, and of the Georgian capital specifically. He was later often the poster boy for unity among the Transcaucasus republics of the USSR – an Armenian of Georgia, most of whose works were in Azerbaijani. That status has not been invoked much since the fall of the Soviet Union.

His heritage remains one of a romantic figure today, in part because, by tradition, he was banished from the Georgian court due to his falling in love with the king’s sister. Sayat Nova is popularly considered to have entered the clergy later, serving in the monastery of Haghpat, in the north of Armenia today. He is said to have been killed by invaders for refusing to renounce his faith.

Sayat Nova continues to inspire, whether as the name for a dance group in the Boston area or as an ethnographical project charting various languages and their music in Armenia, Georgia, and Azerbaijan. His tomb in the Armenian church of St. George in Tbilisi, Georgia, is something of a pilgrimage site. A sculpture nearby of a long lute intertwined with a branch of a pomegranate tree on a scroll serves as an appropriate monument to Sayat Nova’s rich, creative spirit.

A translation into English of Sayat Nova’s I Traveled the World (“Tamam Ashkharh Ptut Eka”), from a collection by Der Hovanessian and Margossian

I traveled the world, even to Ethiopia
but I never saw anything to compare
with your eyes looking back.
Wear sack cloth, wear gold cloth,
your clothes become precious
when you walk in them, coquette.
Whoever sees you says: Just look at that!

You’re a jewel, a ruby.
Whoever has you is happy.
Whoever finds you never feels sorry
for the one who has lost you.
Blessed be the parents who bore you.
Death arrives always early.
But if one is to live, let it be
as an artist,
an artist painting you.

You are a jewel by birth,
a gem set in gold clothes.
Your hair a halo,
your eyes golden crystal.
Your eyelids shaped
from the wheel of the world’s
most wonderful potter.
Your eyelashes, arrows and knives.

Your face, I should describe only
in French and in Persian:
The sun and the moon.
The pencil fails
in the hand of the artist.
When you sit you’re a mulberry bird,
when you stand you’re
a fairytale steed.

I am no longer that Sayat-Nova
who used to rest on the sands.
What are your wishes?
You are fire, dressed in fire.
Which fire can I withstand?
I want to understand the heart
beating inside you.
But you have covered it over
with Indian embroideries, tapestries of gold and of silver,
my coquette, my flirt. 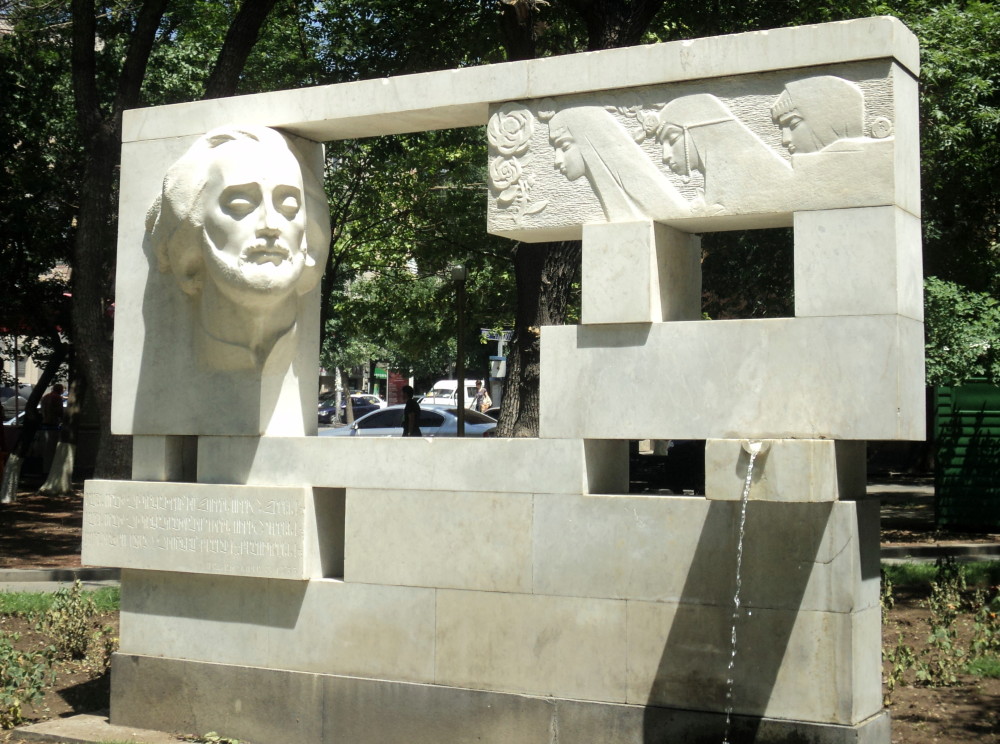 A Soviet-era fountain monument to Sayat Nova in Yerevan, next to a music school named after him, featuring the bard facing three young ladies, each representing one of the South Caucasus nations.

By Armineaghayan (Own work) [CC-BY-SA-3.0], via Wikimedia Commons