The Armenian presence in North America dates back to 1618.

One of the most prominent elements of the Armenian world is the Armenian Diaspora, and the Armenians of the United States and Canada are among the most active communities spread across the planet.

The earliest records date back to one “Martin the Armenian” who was brought in to the colony of Jamestown, Virginia, in 1618. Two more Armenians were invited in the following decades to experiment with raising silkworms in the New World. While there is more evidence of individuals in the 1600s and 1700s, Armenians did not make it en masse across the Atlantic to form organised communities until the mid-to-late-19th century and turn of the 20th century. American missionary work in the Ottoman Empire promoted Western education in the old country; the earliest demographic of Armenians to make it to the States, in fact, were students continuing on to college and university.

A single record exists of an Armenian who took part in the Civil War – Khachadour Garabedian, fighting for the Union as an engineer in the navy, who came over in the 1850s and worked in a factory in Massachusetts. It was, naturally, economic opportunity that also served as a big draw for many to make the move. At the same time, increasing tensions, wholesale massacres (“pogroms”), and, finally, the Armenian Genocide, caused many Armenians to flee their ancestral homes and form nascent communities in Massachusetts, Pennsylvania, New York, New Jersey, Ontario, Michigan, and all the way to California, between the 1890s up to the mid-1920s.

Worcester in Massachusetts, with its factories, and Fresno in California, with its fields, are particularly known as early centres of Armenian immigration. They continue to be home to Armenian-American communities. The “Georgetown boys”, meanwhile, offer another example of Armenian movement to North America: they were a group of genocide orphans brought over and raised on a farm in Georgetown, Ontario, cared for by the Armenian Relief Association of Canada. Montréal serves as a major Armenian centre in Canada today, with Toronto, Vancouver, Calgary, and other cities likewise being home to Armenian-Canadian communities great and small.

Subsequent waves of immigration took place in the 20th century as regimes rose and fell in Beirut, Damascus, Cairo, Jerusalem, Baghdad, Tehran, and, finally, Moscow and Yerevan (as well as Baku) – many Armenians from the former Soviet Union have joined their compatriots from the Atlantic to the Pacific coasts over the past two decades. Southern California in particular is known to have the most diverse Armenian population. It is not impossible to meet young Armenians from Los Angeles today with four grandparents connected to four different continents.

A long list of prominent and successful individuals of Armenian descent in North America could be cited, ranging from such well-known Canadian-Armenians as the children’s singer Raffi and the famed photographer Yousuf Karsh, to Armenian-American figures such as the inventor of the MRI scanner Raymond Damadian, actress Andrea Martin, the first woman master chief petty officer in the US Navy and later CIA officer Anna Der-Vartanian, the artist Arshile Gorky, former Secretary of the Navy Paul Ignatius, tennis star Andre Agassi, not to mention William Saroyan, whose words were celebrated by Armenians and Americans alike in decades past, to noted authors today such as Peter Balakian and Chris Bohjalian – and many, many others who have made their marks in a wide variety of areas.

The 100 Years, 100 Facts Project will have future postings on prominent Armenians in various fields, including the arts and entertainment, politics, business, science, and the world of sport. 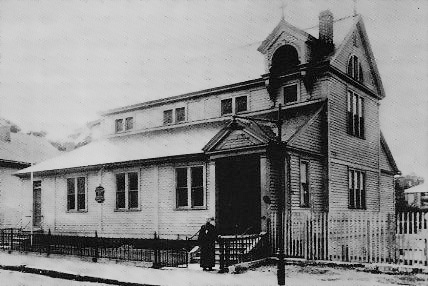 The first traditional Armenian church in America – Worcester, Massachusetts, 1891; an Armenian Protestant house of worship in the same town dates to a decade earlier.