The term “genocide” was coined bearing the Armenian experience in mind.

Wholesales massacres are not a new invention. Records of mass killing, whether of bloodthirsty, pillaging hordes, or organised armies of conquerors or colonists, have added shades of red to the pages of history books and chronicles since very ancient times. The concept of genocide, however – to be more specific, its use as a legal term in international law – is a 20th century phenomenon, and it stems from the Armenian experience of the First World War, in the dying days of the Ottoman Empire.

The Convention on the Prevention and Punishment of the Crime of Genocide was passed unanimously by the UN General Assembly in 1948. The individual behind that document, its development, its meaning, and its adoption, was one Raphael Lemkin, a Polish Jew born in 1900 in what is Belarus today. Lemkin closely followed the widely-reported massacres and deportations of Armenians in his youth, and invoked that experience later with the Jewish Holocaust, during which his own family perished.

As the Nazis invaded Poland, Lemkin found safe haven in the United States, where he gained a reputation as a legal scholar following his work at Duke University, in the US government, and at Yale – positions that allowed him to pursue efforts against targeted killings at the Nuremberg trials of German officers, and also at the UN. He came up with “genocide” as an original term in order to highlight the phenomenon and give it enough depth to stand on its own as a legal category. Lemkin mentions in a TV interview of the time how the word, which combines Greek and Latin roots, was informed by the Armenian experience.

Listen to Raphael Lemkin in this interview:

There are very few international legal violations that are considered to be of the same grave nature as genocide, the others being war crimes, aggression, and crimes against humanity. That last term also came about as a result of the massacres and deportations of Armenians and other minorities in the Ottoman Empire. Although used in public as a phrase before, it was during the First World War that the Allies (Britain, France, Russia) officially declared in May, 1915, their intention to “hold personally responsible … all members of the Ottoman government” for “crimes of Turkey against humanity and civilization”.

According to the UN convention, “genocide” includes “acts committed with intent to destroy, in whole or in part, a national, ethnical, racial or religious group”. After many decades of efforts on the level of governments, organisations, and individuals – and even with continued political and diplomatic wranglings – the International Criminal Court has been in existence since 2002, and is charged with handling cases of such grave crimes.

Slogans such as “Never again” and “Lest we forget” tugs at our heartstrings, but the Armenian Genocide and Jewish Holocaust were followed by events in Cambodia, in Bosnia, in Rwanda – to give just a few horrific examples – with the case of Darfur ongoing today. Whether referred to as massacres, humanitarian catastrophes, ethnic cleansing, or genocide, the question that Rapheel Lemkin asked all those decades ago remains just as relevant today: “Why is the killing of a million a lesser crime than the killing of an individual?”.

Tom Samuelian of the American University of Armenia wrote in to add: “The US position recognizing the Armenian Genocide has been on record at the International Court of Justice since 1951. As can be seen at http://www.armenian-genocide.org/Affirmation.388/current_category.6/affirmation_detail.html, the written statement of the government of the United States of America with regards to the UN Genocide Convention states that, ‘The practice of genocide has occurred throughout human history. The Roman persecution of the Christians, the Turkish massacres of Armenians, the extermination of millions of Jews and Poles by the Nazis are outstanding examples of the crime of genocide.’

While parties and witnesses are known to make false statements in their submissions to courts, to my knowledge, the US has never repudiated this position or admitted to making false statements to the International Court of Justice on this occasion. Moreover, unlike other public statements made by officials, this is an official representation by the state (the government) to the highest international legal body.

If not by President Truman himself, then the statement must have been drafted, approved and delivered on behalf of the United States by Secretary of State Dean Acheson, or the representative at the UN Warren Austin, or Adrian Fisher – the Legal Adviser to the State Department, which is the most authoritative legal voice on international matters in the US government. Fisher also served at the Nazi war crimes tribunal at Nuremberg.”

The team at The 100 Years, 100 Facts Project would like to thank Mr. Samuelian for his feedback. 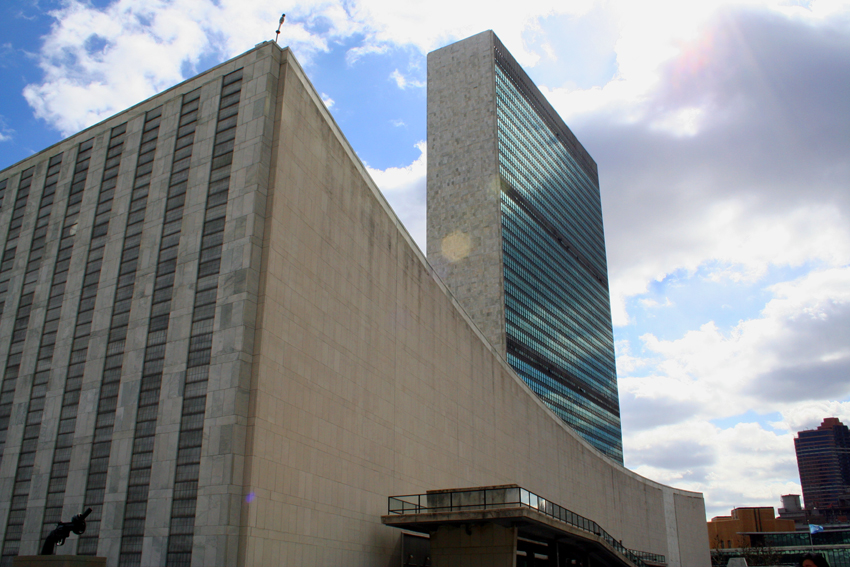 The UN building in New York

By Graeme Maclean (originally posted to Flickr as secretariat) [CC-BY-2.0], via Wikimedia Commons