The names of the deities of the Armenian pantheon can still be heard today.

The pantheon of the pagan Armenians consisted both of local gods and goddesses, as well as deities that were adopted from other cultures in the neighbourhood. As one would expect, natural phenomena were worshipped, such as the sun and moon, or mountains and rivers, while more abstract concepts were deified as well, such as beauty or wisdom.

One particular member of the temple of ancient Armenians was the god of writing, Tir (Dir in Western Armenian pronunciation). The fact that he was worshipped offers an interesting argument to support the idea that the Armenians had a written culture before the 5th century creation of the Armenian alphabet, a hundred years after the coming of Christianity.

Although a lot of the ancient Armenian culture was swept aside with the dominance of the new religion, there is still some pagan influence felt today, a reflection of which can be found in that very god, Tir, referred to as the “Writer” or “Grogh” (“Krogh” in Western Armenian). Tir was in charge of recording good and evil deeds and then conducting souls to the afterlife. Today, it is not uncommon in Armenia to hear the curse, “Groghe tani!” – “May the Writer take it away!”.

Another common expression in Armenia, besides swearing to God or swearing by one’s ancestors, for example, is to swear by one’s father’s sun (“Hors arev!”). This turn of phrase could be another indication of objects of worship in ancient times or perhaps of guardian spirits.

Interestingly, one word in Armenian for pagan deities is a grammatically-direct negation of the word for “God” – “Astvats” or “Asdvadz” becomes “chastvats” or “chasdvadz”, meaning, quite simply, “non-God”, certainly in the Christian context.

Not that Christianity got completely rid of all pagan customs among Armenians. In fact, the Armenian Church still accepts offerings of sacrificed animals as a mark of giving thanks or of alms, a practice known as “matagh” (“madagh”) which is known to have existed since the very early days of Christianity at least. Other customs that are believed to date back to pre-Christian times but are somehow tied to the modern religion in Armenia include playing by splashing water one one another during the Feast of the Transfiguration in July (known in Armenian as “Vartavar”) and jumping over bonfires during the Feast of the Presentation of Christ to the Temple, held in February (also referred to as Candlemas; “Tyarnuntarach” or “Dyarnuntarch” in Armenian).

Many given names among Armenians today are the names of ancient gods and goddesses, such as Aramazd, Vahagn, Anahit, and Astghik, to mention just a few.

Response from one of our readers:

The practice of giving names of pagan deities to Armenian children is a custom that began in the 19th century and continued in the 20th. I think one can check that by going through Hrachya Acharyan’s Dictionary of Personal Names. Usually, except the deities themselves, no other Armenian person with those names is mentioned throughout the Middle Ages. The oldest Ara that I have come across in historical sources was a violinist in Constantinople born in 1895. The name Astghik is mentioned a little earlier, as the stage name of a famous actress, also in Constantinople. I think it is one indicator of how Armenians changed from seeing themselves as the followers of a religious institution (the Armenian Apostolic Church) to members of a “Kulturnation” – as defined by German thinkers of the period, especially Johann Gottfried Herder.

This is an important topic, and can be the subject of a good article. If there are registers of baptisms in the Armenian churches in Constantinople/Istanbul, that would be a good place to start. Otherwise, the periodical press is our next important source. Although I cannot affirm this unconditionally, it is probable that this tradition of giving pagan names to some of the Armenian newborn began earlier in Constantinople than in the Armenian provinces of the Ottoman Empire.

The team at The 100 Years, 100 Facts Project would like to thank Dr. Sanjian for his feedback. 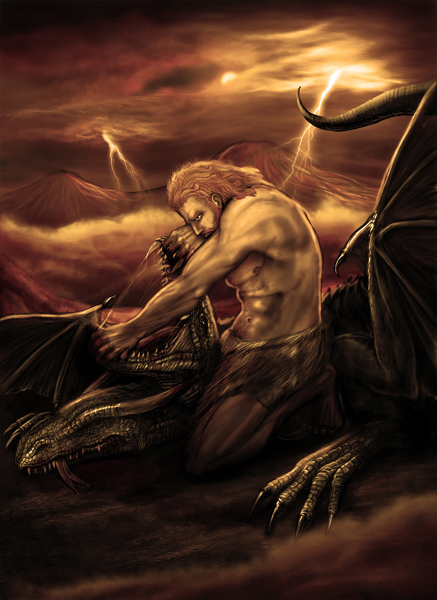 A modern depiction of Vahagn Vishapakagh – Vahagn the Dragon-Slayer, a hero of ancient Armenian legend and a god of the Armenian pantheon.