The most elaborate khachkars were made in the 13th century.

Armenia is not an island by any means. Quite the contrary, the country has been sitting on international crossroads from east to west and north to south for the past few millennia. As a result, besides enduring all sorts of wars and conflicts, the Armenian people have also interacted with a number of cultures, being influenced by much and influencing others in turn. As a natural consequence, many elements of culture echo throughout the region’s peoples, whether it is similarities in forms of music and dance, cuisine, or traditional clothing.

Some aspects of culture, though, are truly unique expressions. The khachkar, for example, is an authentic Armenian form of art. Made up of the Armenian words for “cross” and “stone” – and therefore often rendered in English as “cross-stone” – khachkars fuse together two mainstays of the Armenian identity: the Christian heritage, carved on to the rocks prevalent in the highlands, or sometimes right onto those mountains themselves.

Not just these khachkars there, but part of the Monastery of Geghard itself is carved onto the side of a mountain in Armenia
By Vahag851 (Own work) [CC BY-SA 3.0], via Wikimedia Commons

Dating from the 9th century AD, the khachkar art form saw its most intricate works around the 13th century, becoming less popular starting in the late 1700s. The 20th century brought its return and a rather sharp rise in development, especially after Armenian independence. UNESCO, for its part, incorporated khachkars into its Representative List of the Intangible Cultural Heritage of Humanity in 2010.

Out of various designs, the “Tree of Life” element is particularly prevalent among khachkars today – carved knot-work, neither the beginning nor the end of which is identifiable, somewhat similar to such motifs in Celtic art. “Winged Crosses” are also not uncommon, comprised of an Armenian cross with its sharp points dominating over two wings spreading like flames from a circular shape (rosette) below and to the sides. Besides geometrical designs, khachkars depict such symbols as grapes or pomegranates, plants and animals, and, on rare occasions, even people.

Details of a 16th-century khachkar, probably a grave marker; the magnificent rosette overlooks the text which indicates that the holy cross is in memory of a pilgrim, who can be seen richly adorned on horseback
By XenonX88 (Own work) [CC BY-SA 3.0], via Wikimedia Commons

Khachkars are used as items of decoration. Their religious overtones make them beautiful fits for Armenian churches around the world. Often monuments and memorials are in the form of khachkars, whether an Armenian Genocide monument or any other solemn tribute. Certainly more elaborate gravestones take on the khachkar tradition in Armenia and abroad. A good example of khachkar graveyards can be found at the site of Noratus in Armenia today, near Lake Sevan. It offers hundreds of years of continued use, with varying styles of commemorating the dead over the centuries.

A more famous khachkar field used to exist in Julfa (Jougha), currently in the Azerbaijani exclave of Nakhichevan, by the river Arax. Railroad construction got rid of one part of the Jougha khachkars during the times of the Russian Empire, and while the area remained dormant in the Soviet era, the process of their destruction began in the 1990s, culminating in an international outcry in December, 2005, as it became clear that the Azerbaijani authorities actively undertook to destroy the Armenian cultural heritage there in its entirety. The priceless works that had stood since as early as the 13th century – over two thousand of them at that point, comprising the largest Armenian cemetery in the world – were finally bulldozed, despite reactions from the European Parliament, among others. A superb khachkar from the Republic of Armenia on display at the headquarters of the United Nations in New York
[CC BY 2.5], via Wikimedia Commons 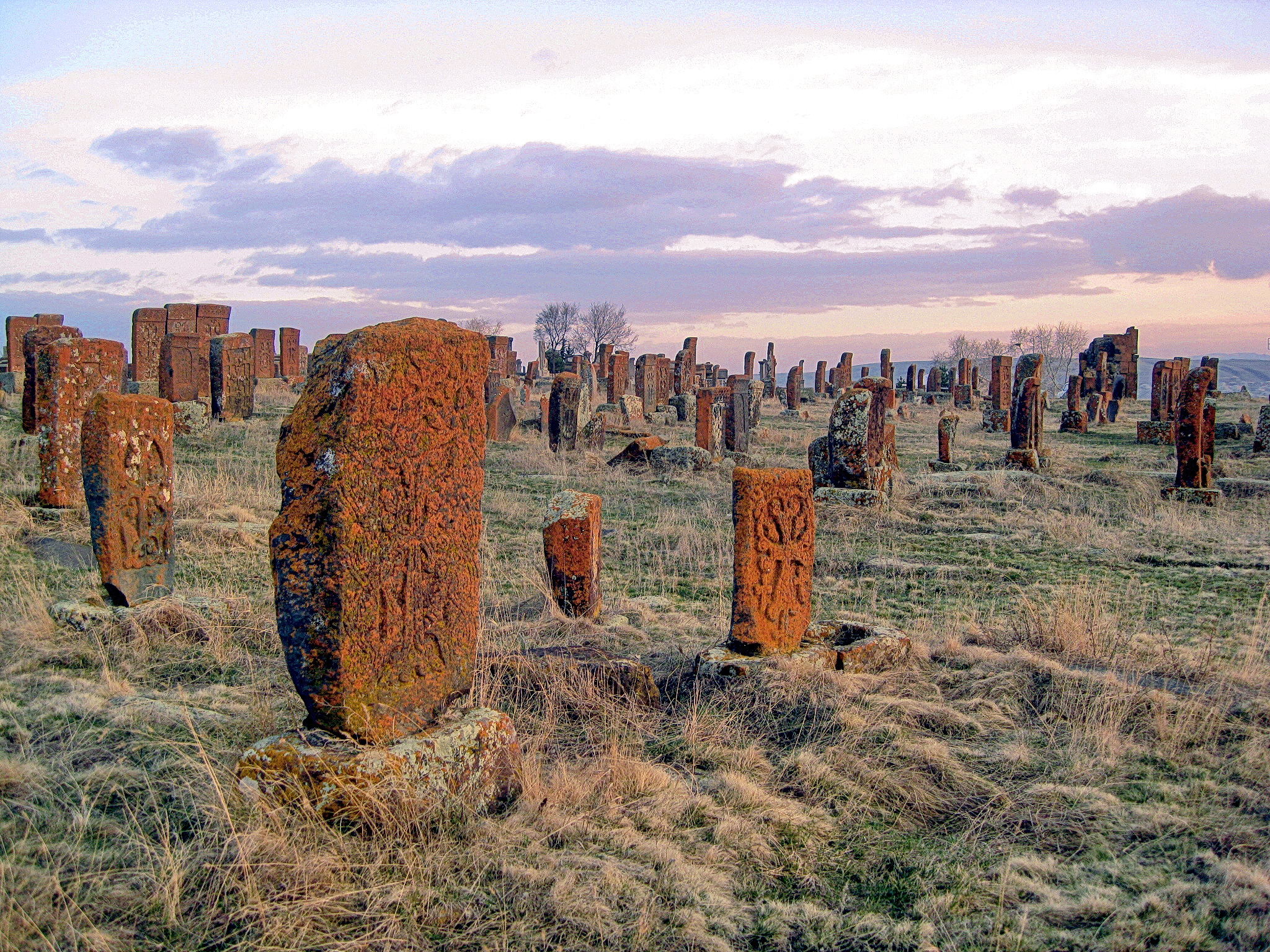 The Noratus cemetery, near Lake Sevan in Armenia, the earliest works of which date back almost a thousand years.