The Catholicos of the Great House of Cilicia sits in Antelias, Lebanon.

As the Armenian capital moved from place to place – as different conquerors made their way through Armenia, and different Armenian kingdoms rose and fell – the last hurrah of Armenian independence before modern times sounded on the south-eastern coast of Turkey today, a region known historically as Cilicia (Çukurova in modern Turkish), where an Armenian kingdom lasted from 1198 to 1375.

Following the influx of Armenian movement as a result of Seljuk Turkish invasions, the Catholicos, or head of the Armenian Church, found himself in Cilicia in 1116 AD, having long since moved from the original location of Etchmiadzin set by the evangeliser of the Armenians, St. Gregory the Illuminator, in the early 4th century. By 1292, the capital city of Sis (modern Kozan) hosted the Armenian Catholicos. As Cilician Armenia fell in 1375, the plan to move the Catholicosate back to Etchmiadzin in 1441 fell into dispute. As a result, more than one Armenian patriarch has held the title of “Catholicos” since – although the supreme honour remains that of the Catholicos of All Armenians at Etchmiadzin.

Among the over one thousand Armenian priests who were victims of the Armenian Genocide were those serving under the Catholicos at Sis. He moved south in 1921 with the wave of deported Armenians, wandering through Syria and Lebanon. Finally, in 1930, the Catholicos of Sis acquired a plot of land that used to house an orphanage through the American organisation, Near East Relief, located in Antelias, next to Beirut in Lebanon.

Antelias today includes a cathedral, a museum, and a library, apart from serving as the residence of the Catholicos of the Great House of Cilicia – as the formal title goes – and preparing clergy to serve the various Armenian parishes under his jurisdiction. The Holy See of Cilicia looks after the Armenian flock in Lebanon, Syria (Aleppo), Cyprus, Greece, Iran, and the Gulf countries.

Controversies arose during the mid-20th century, with regards to the Catholicos at Etchmiadzin in Armenia and the one at Antelias in Lebanon, especially in light of the Cold War, with Armenia having come under communist Soviet rule. As a result, parishes ended up being divided between them – the division most stark in the United States and Canada, where churches both under the Catholicos of All Armenians and the Catholicos of the Great House of Cilicia continue to function (and although both parishes use the same word in Armenian to describe themselves – “tem” – the former call themselves “dioceses” led by a “primate” in English, while the latter prefer to be described as “prelacies” led by a “prelate”).

A political and ideological battle-ground in the past, this division has not been very consequential for the present generation, especially with Armenian independence since 1991. More significantly, the Armenian Catholicos at Antelias was elected the new Armenian Catholicos at Etchmiadzin in 1995. Although the two titles still remain, and the jurisdictions and administrative divisions continue, the relations between Antelias and Etchmiadzin are not publicly sour by any means. In fact, a general synod (meeting or gathering) of all Armenian bishops took place at Etchmiadzin in 2013 – billed as the first in four centuries – in order to at least agree on, for example, the canonisation of new saints, in particular the victims of the Armenian Genocide, in time for the centenary commemorations to be held in 2015. In general, the customs and practices of Armenian churches under either Catholicos do not differ significantly. 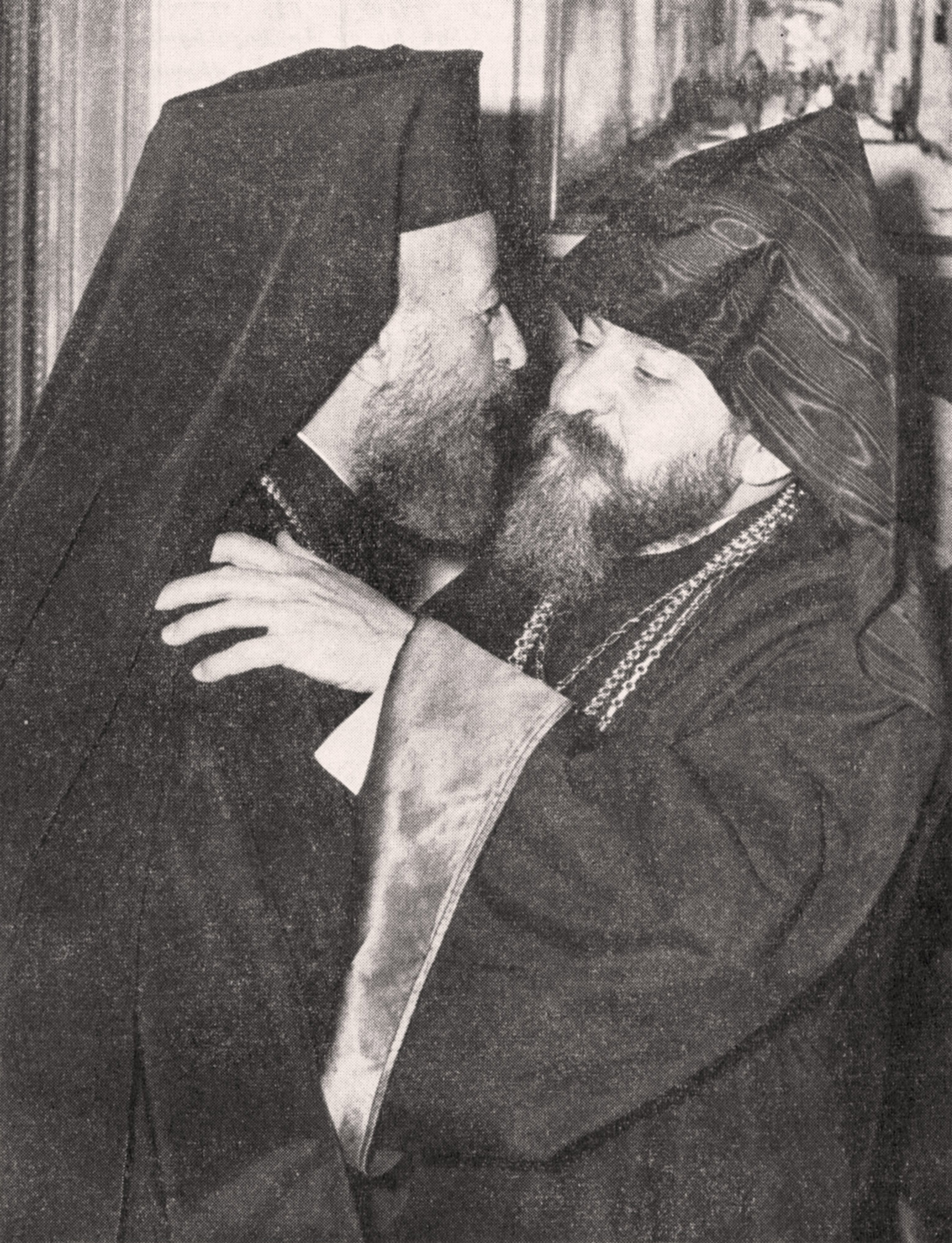 Antelias Catholicos Khoren I meeting Archbishop Makarios III, an influential social and political figure of Cyprus; the Catholicosate of the Great House of Cilicia has been extremely active when it comes to inter-religious and inter-denominational dialogue – fields to which it had much broader access than the Soviet-dominated Etchmiadzin Catholicosate for most of the 20th century.