Talaat Pasha was assassinated in Berlin on March 15, 1921.

Talaat Pasha was one of the three officials heading the Young Turks in the dying days of the Ottoman Empire and the chief organisor of the Armenian Genocide. He fled to Berlin as the Allies moved towards victory in the First World War. The military tribunals that took place in occupied Constantinople in the years 1919 and 1920 sentenced him and other former high officials to death in absentia for their roles in the horrific crimes committed in particular against the Armenians and other Ottoman Christian subjects. However, those sentences could not be carried out by those courts, and, quite soon, the revolutionary movement led by Mustafa Kemal overtook the proceedings. Western powers subsequently came to their own agreements with the new Turkish government, now based in Ankara.

The Armenians, however, did not allow those verdicts to fall by the wayside. What is referred to as “Operation Nemesis” oversaw the pursuit and killing of a number of senior officials who were instrumental in carrying out the Armenian Genocide. Perhaps the most far-reaching of those assassinations – certainly the most sensational – was that of Talaat Pasha, who was killed in broad daylight in Berlin, on March 15, 1921.

Soghomon Tehlirian was the one who pulled the trigger. Like many of his compatriots, he had witnessed the horrors of 1915, watching his family massacred before his eyes, he himself being left for dead. Surviving, and joining the ranks of the Armenian Revolutionary Federation, Tehlirian gained some fighting experience and training before being involved in the covert assassination plots. He arrived in Germany, took up lodgings right by where Talaat Pasha was residing in Berlin, and, after some investigations, carried out his mission.

Part of the point was to get caught, to have a trial, and generate coverage for it. The whole affair was a major event for its time, not merely because it brought to light the realities of the Armenian Genocide that were slowly but surely being shoved aside – in particular in Germany itself, where news of such massacres in an allied country had not been freely spread during the war – but because, in the end, Soghomon Tehlirian was acquitted for his crime. There was no denial, no question of who killed whom and how. But, after being exposed to the whole story – the transcript runs for pages and pages, detailing Tehlirian’s horrific experiences and later mental state – the jury thought it best to let Tehlirian go. Needless to say, the case caused an immense outcry and provided a strong sense of vindication for Armenians already dispersed around the world.

Tehlirian later lived in Serbia, before finally moving to California, where he died in 1960. He is buried in Fresno, at the Ararat Cemetery, underneath an obelisk capped by an eagle with outstretched wings attacking a snake. Talaat Pasha’s remains were moved from Nazi Germany to Istanbul in 1943, buried with full honours at a national monument that still stands. 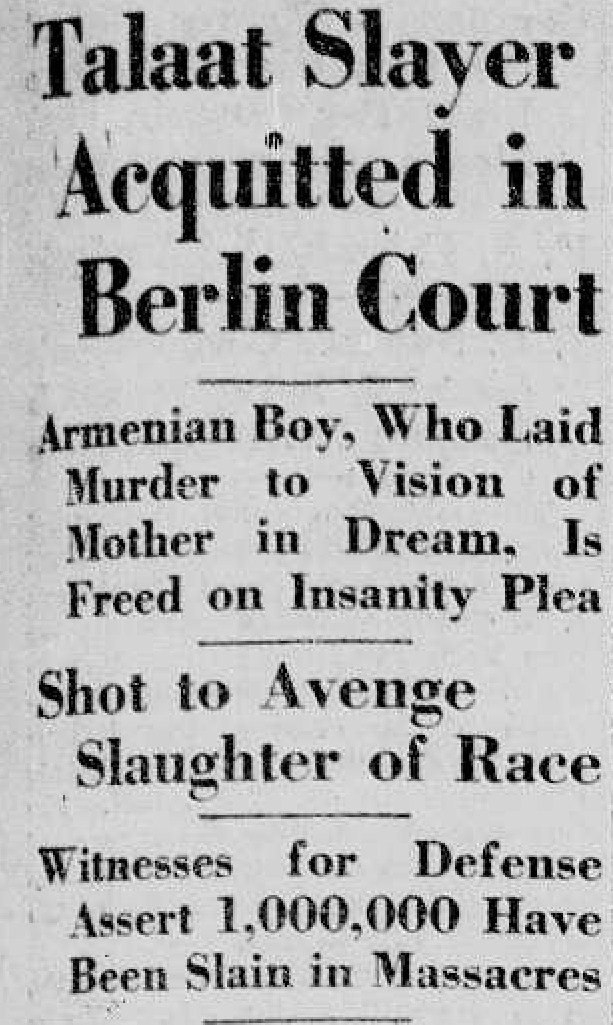 Headline in the New York Tribune for June 4, 1921; the story’s first paragraph includes: “… His defense was that, at the exhortation of his mother, revealed to him in a dream, he had shot the man who ordered the Armenian massacres to carry out the death sentence passed on him by the Armenian nation.”