The seat of the Catholicos of All Armenians is in Etchmiadzin in Armenia.

The Armenian Church embodies one of the oldest heritages of Christianity in the world. After the conversion of Armenia through St. Gregory the Illuminator, by tradition in 301 AD, the work of building churches began – often at the expense of pagan houses of worship. While apparitions of the Virgin Mary are not uncommon across the Christian world over the past two thousand years, visions of Jesus have occurred comparatively fewer times. One of those times was before St. Gregory, marking out where a temple was to be made by striking on the ground with a golden hammer. This tradition gave rise to the name of the church that was built – “Etchmiadzin”, which means “The Only-Begotten [The One Son of God] Descended”.

Etchmiadzin is thus a very holy place in the Armenian heritage. Not surprisingly, it turned into the seat of the Catholicos of All Armenians, the patriarch who leads the Armenian Apostolic Church and the dioceses that come under Etchmiadzin. At the time of the early 4th century, the city of Vagharshapat, where it is located, was the capital of the Kingdom of Greater Armenia. As capitals and kingdoms shifted over the next centuries, so did the Catholicos.

There are and have been other Armenian bishops and patriarchs who, for one reason or another, took on or received the title of “Catholicos”, located across various important centres of the Armenian Highlands and Cilicia. Etchmiadzin’s turn to house the patriarch came once again in 1441, and it continues to be the Mother See ever since, despite the political instabilities that the region has faced – especially in light of the extreme acts against religion and religious institutions that took place during Stalin’s rule over the USSR.

There is some diversity to the Armenian Church, including more than one patriarch, as well as Armenian Catholic and Armenian Evangelical (Protestant) traditions. One element that can serve to bind them together is the Holy Muron, or Chrism – the anointing oil that is prepared once every seven years, used during baptisms, among other sacraments, being dropped through the mouth of a dove-shaped container symbolising the Holy Spirit. The old oil is combined with the new, thereby extending and strengthening the legacy. The ceremony, which also seeks blessings from the relics of the lance that had struck Christ on the cross, of the cross itself, and of the right hand of St. Gregory the Illuminator, combines various oils, herbs, flowers, and other plant extracts – around forty different ingredients in all, many brought from abroad especially for the purpose, using a precise recipe that involves cooking and steaming over forty days.

The Holy Muron takes flight from Etchmiadzin, quite literally, in order to make its way to Armenian churches all over the world. Dioceses and churches outside of Armenia under Etchmiadzin can be found in the United States, Canada, Argentina, Germany, Australia, Italy, Egypt, Holland, Syria, Georgia, India, Greece, Ethiopia, Romania, Brazil, Austria, Iran, Belgium, Uruguay, Bulgaria, Iraq, England, Venezuela, France, Russia, and elsewhere. 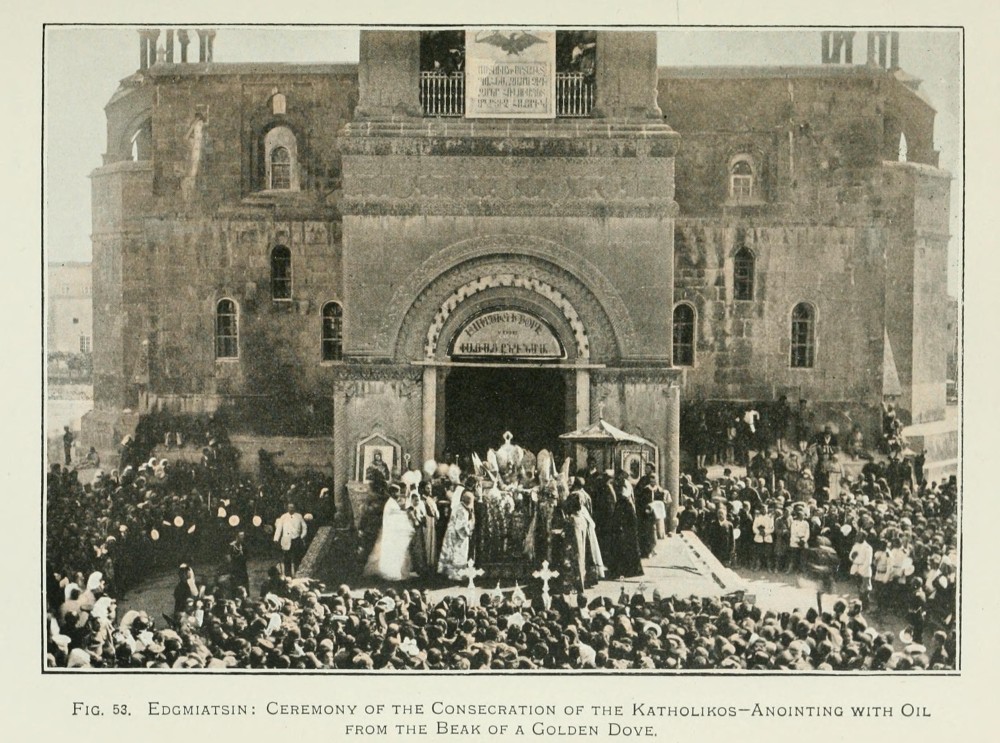 By H. F. B. Lynch [Public domain], via Wikimedia Commons