Armenian massacres and deportations were widely reported in the international press between the 1890s and 1920s.

The Armenian Genocide – the systematic policy of extermination of part of the population of the Ottoman Empire by its own authorities – began in 1915. It was preceded by at least three waves of massacres of Armenians in the 1890s and 1900s, alongside formal, institutional policies of discrimination.

The country was not closed to the outside world during those decades. A number of major, reputable international news agencies and press outlets reported on the plight of the Ottoman Armenians during this era, from the 1890s on, in the run-up to the First World War. Information was spread from Constantinople to London and New York, to Paris and St. Petersburg, Berlin, Vienna, Rome, Washington, and further on to other capitals, cities, and towns across the planet. From Honolulu to Harare to Hong Kong, the citizenry was made aware of the horrors being faced by Armenians and other Christians in Anatolia and Asia Minor through The New York Times, The Times of London, The Washington Post, The Globe and Mail, The Sydney Morning Herald, The Los Angeles Times, The Independent, The Chicago Daily Tribune, and other newspapers and news wires that spread the word to smaller outlets and beyond the English-speaking world.

Considering the year 1915 alone, one headline in The New York Times for April 28 began, “Appeal to Turkey to Stop Massacres”, the lead sentence reading, “An appeal for relief of Armenian Christians in Turkey, following reported massacres and threatened further outrages, was made to the Turkish Government today by the United States”. Less than half a year later, the October 7 edition of The New York Times offered the headline, “800,000 Armenians Counted Destroyed”. The Independent, in its October 18 edition, ran the headline, “The Assassination of a Race: The Hopes and the Threatened Fate of the Armenians”. Such reports were not uncommon as the Armenian Genocide played out during the First World War, continuing into the 1920s. 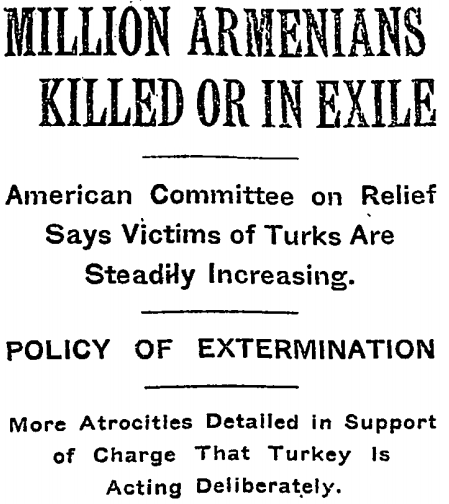