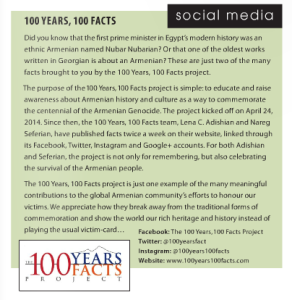 The facts published so far have included entries ranging from the Zildjian family of cymbal-producers to the Armenian community of Australia and New Zealand to differences between Eastern Armenian and Western Armenian. Facts related more directly to the Armenian Genocide out of the first half have involved the role of confiscations of Armenian-owned property in the modern Turkish state, formal recognitions of the Armenian Genocide around the world, as well as reports from the international press during the First World War.

“Citing 200 days until the centennial, we listed a few reasons that were behind this initiative,” Lena Adishian, project lead, said. “We want to celebrate the Armenian spirit that has carried us across generations and across oceans, remembering what our ancestors had to live through, the legacy of which we bear today. We also want to emphasise the educational nature of 100 Years, 100 Facts, for Armenians and non-Armenians alike. This project is, in addition, meant to look as much to the future, to fulfilling the potential of the Armenian people and the Republic of Armenia, as to recalling past events. Finally, both Nareg and I felt a real need to participate somehow in the Armenian Genocide centennial. We hope our work is meaningful enough to inspire others to be involved in commemorations and in various Armenian activities in their own way.”

“The response online has been extremely positive,” Nareg Seferian, researcher and writer, added. “Our Facebook page has steadily grown to over 3,500 ‘likes’, with over 900 followers on Twitter, alongside almost 1,000 readers on Instagram, and a presence on Google+. The most popular post, about Armenians and the world of coffee, was shared well over 500 times and reached more than 50,000 unique users. The comments we have received – including additions to our facts by diligent visitors to the website – highlight how far we have gone in engaging our readers around the world, while the Portuguese version of the site, spearheaded by Portal Estação Armênia, based in Brazil, and a great interview with CivilNet in Yerevan, have encouraged us to carry our work forward as 2015 approaches.”

Future facts will include more Diaspora communities, notable Armenians of the Ottoman Empire and elsewhere, one highly obscure book from medieval Yemen with an Armenian connection, and many other entries on Armenian history, culture, language, and religion.

Following the posting of its tenth entry, The 100 Years, 100 Facts Project is pleased to announce over 2,500 users on the website since April 24 from more than 60 countries and almost all 50 states of the United States – while also attracting nearly 500 followers on Twitter, over 1,000 likes on the Facebook page, as well as followers on Instagram and on Google+. The most popular entry on the website so far was shared over 60 times, reaching up to 10,000 users.

Besides its own web presence, The 100 Years, 100 Facts Projects, recently launched a Portuguese-language version of its content in partnership with Estação Armênia, the premier Brazilian-Armenian internet portal. Projeto 100 Anos, 100 Fatos will enrich the vision of spreading education and awareness on the history and culture of the Armenian people in the run-up to the centennial of the Armenian Genocide, leveraging the power of the web and social media.

“This is an educational effort at heart,” said Lena Adishian, project lead, based in Los Angeles. “That’s why 100 Years, 100 Facts was set up bearing in mind how people process and share information today. The facts are brief and easy to read by design, but they also include references for additional research. Given the variety of entries, one application of the website, for example, could be for reports at schools, whether Armenian or non-Armenian establishments, besides generally being a resource for sharing interesting information.”

“It’s the year 2014, which means both that the Armenian Genocide centennial is next year, and also that – what with the prevalence of the internet and social media, smartphones and tablets – the way that 100 Years, 100 Facts works is just the sort of effort that is meant to be made in this day and age. We are currently ten in, and look forward to the 90 more to go before April 24, 2015,” added Nareg Seferian, researcher and writer for the project.

The goal of The 100 Years, 100 Facts Project is to highlight aspects of Armenian history and culture first of all for Armenians themselves – as a means to connect or reconnect with one’s heritage – and also for a broad audience, ranging from the people of Turkey, to society at large wherever the Armenian Diaspora is found, to any individual curious about the topics covered. Besides discussing the Armenian Genocide itself, the facts include lives of famous Armenian individuals, Armenian Diaspora communities, and other elements of Armenian culture, including religion, language, literature, and even sports and entertainment.

The 100 Years, 100 Facts Project does not claim to be an academic endeavour. However, the effort has been made to present the facts in a scholarly manner, with references and resources listed for the benefit of additional research by the readership.

On the threshold of the centennial of the Armenian Genocide, The 100 Years, 100 Facts Project will commemorate the genocide by publishing facts about Armenians twice a week, starting April 24, 2014 and culminating on April 24, 2015. These facts will be published on yf.stage56.endertech.net – linked through its social media accounts on Facebook, Twitter, Instagram, and Google+.

“The idea of using social media and the internet as a means to commemorate the Armenian Genocide and connect a population scattered around the world was inspirational to me,” said Lena Adishian, project lead, based in Los Angeles. “While curating one hundred facts about Armenia and Armenians is no easy task, we hope that audiences find the content educational and engaging.”

The goal of The 100 Years, 100 Facts Project is to highlight aspects of Armenian history and culture first of all for Armenians themselves, and also for a broad audience, ranging from the people of Turkey, to society at large wherever the Armenian Diaspora is found, to anyone curious about Armenia and the Armenian people.

Besides discussing the Armenian Genocide itself, the facts include lives of famous Armenian individuals, Armenian Diaspora communities, and other elements of culture, including religion, language, literature, and even sports and entertainment.

“I got very keen on the idea of 100 Years, 100 Facts when Lena approached me with it. This website can serve as a meaningful, enduring commemoration – even a celebration – of the Armenian nation,” said Nareg Seferian, researcher and writer for the project, based in Yerevan. “Some of the facts are very well-known, for example, the Armenians as the first Christians, or the efforts of Near East Relief after the genocide. But we have also found obscure, fun, and interesting tidbits about the history and culture of what is, by all accounts, a remarkable nation, such as a profile of the Zildjian family, or an entry on Armenians in Africa.”

The 100 Years, 100 Facts Project does not claim to be an academic endeavour. However, the effort has been made to present the facts in a scholarly manner, with references and resources listed for the benefit of additional research by the readership.