My Grandmother Survived Both the Ottoman Turks and the Nazis

Written by Lena Maranian Adishian on the occasion her late grandmother’s 100th birthday.

My grandmother survived both the Ottoman Turks and the Nazis. It’s true and, the older I get, the more I appreciate how extraordinary it is that she beat the odds, twice.

Angèle Shamiram Nalbandian was born in the town of Keskin Denek Maden, located in the Ankara vilayet of Ottoman Turkey on May 15, 1915 – a poignant year, as it was the beginning of what we all now know as the Armenian Genocide.

As a family, we were lucky because Angèle recounted her life story to us many times, and my father had the foresight to audio record her on several occasions. My grandmother told us that her father died of appendicitis when she was little and that she was sent away with her sister to get a better education. This was a convenient story told by her mother, but it was actually not true. We only recently learned through the translated memoirs of my grandmother’s uncle – one hundred years later – that her father had been poisoned. She, her mother and sisters were taken in by Turkish neighbors and saved. This is one of those instances, too seldom remembered, of Armenians being protected by Turkish or Kurdish friends during the horrors that befell the nation.

With her husband dead and no income, Angèle’s mother struggled to care for her four daughters. The eldest was married off at the age of 14 and the youngest, a baby at the time, stayed with Angèle’s mother. The two middle sisters – my grandmother and her sister, Reine Haygouhi – were sent to orphanages for their own safety and, perhaps, more opportunities than their mother could provide. Angèle and Reine traveled to Zincidere and Mersin in Turkey and Beirut, Lebanon, where they ended up in orphanages in Zouk and Jounieh. From there, Angèle and her sisterwere moved to a Catholic Armenian orphanage in Alexandria, Egypt funded by the Matossians, a family of we 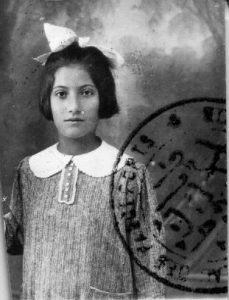 Angèle did not experience the horrors of Armenian Genocide that so many did. She was not on the death marches. She did not see people raped or murdered before her eyes. But she did lose her childhood and suffered in some pretty hard conditions. She lost touch with her mother for the majority of her formative years. Letters were sent, and letters were lost. But, after about ten years, someone cleverly realized these Nalbandian sisters were nieces to the Catholic priest Abbot Jean Nalbandian. The Abbot, the same uncle whose memoir revealed the truth about their father’s death, had been relentlessly searching for them and, finally, reunited Angèle and Reine with their mother in Belgium. Wasn’t that reunion a happy one? Of course. But the decade-long separation had given rise to differences that took time mend.

In Belgium, Angèle trained to be a Catholic nun. That was her chosen path until her mother suggested she marry a British-Armenian man originally from Manchester, England, now living in Holland. Angèle married Maurice Maranian on August 26, 1939. A week later, World War II erupted and the second chapter of her life, surrounded by the worst and best of humanity, began.

Germany invaded Holland and all British nationals were arrested and placed ininternment camps. Angèle and Maurice, newly wed a 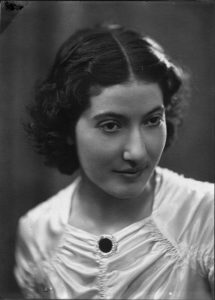 nd just getting acquainted, were separated into two camps that were 500 miles apart. They did not know if they would see each other again. Camp life was difficult, as they had little food and harsh accommodations. (This paled in comparison, of course, to countless Jews, Roma, homosexuals, as well as disabled people and others being persecuted or sent away to gas chambers.)

After more than 3 years, Angèle and Maurice, along with other separated couples, petitioned to be together, and were reunited in Vittel, France. Shortly thereafter, Angèle discovered that she was pregnant with twins – a great joy amidst a sea of sadness. Angèle gave birth to Michael Manoug and Margaret Araxie on April 17, 1944, sharing a hospital room with a Jewish woman who had a newborn as well. Her name was Stella Geller and her only family member was the baby boy she had just brought into the world. Around the same time, her husband, other family members and over 500 internees had been sent to Auschwitz, but Stella was spared by providing false documents to the Nazis. Angèle and Stella raised their babies together for six months. My grandmother said she would never, ever forget Stella’s very sad circumstances and always recounted how Stella was emotionally distraught, often crying inconsolably.

In September of 1944, Angèle and Maurice, together with their twins, were liberated by the Allies following heavy bombing. They gathered their few possessions, and the British Consulate arranged for travel to London where they stayed at a refugee center. The British press heard about Angèle’s story of giving birth to the twins in an internment camp and featured her in an article: “Born in Captivity, Freed in London”. 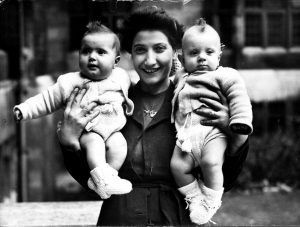 rse of Angèle’s life had been dictated by the Ottoman Turks and the Nazis.

Had she not been forced to move from Ottoman Turkey during World War I, she would not have been forced to experience an internment camp during World War II. What affect did all of that have on her? She was one of the most compassionate people around, with an open door to her home and empathy for everyone. It was as if she always thought in the back of her mind that you just do not know what some people have experienced in their lives and, therefore, you have to meet each person with an open heart.

Angèle lived in England for over 60 years and even through further difficult times – Maurice’s sudden death and the untimely loss of her daughter, Margaret – she pressed on, surely a skill she retained from the adventures of her early years. She worked until she was 85 years old and passed away in 2007, aged 91. I held her hand as she took her last breath.

My grandmother would at times say that she didn’t know where she belonged: she lived so many places in her life, that it was hard to call one place “home”. Yes, she was Armenian and she was proud of that. But Angèle’s life went through so many ups and downs that it was sometimes hard to connect to that identity and what it meant.

When I started The 100 Years, 100 Facts Project, I had my grandmotherin mind. I thought that, if she felt this way, then so many other people must have felt that way too – and maybe even more so now, one hundred years after the Armenian Genocide.

My grandmother, I conclude, was a little piece of Armenia that had been forced out of her homeland and moved all around the world.

As we reflect on the centennial activities that took place this past year, we see that there are many, many little pieces of Armenia scattered around the globe. My grandmother was a piece, I am a piece, you are a piece.

We started this project because we have a certain belief about the Armenian Diaspora – that those little pieces still very much care and are eager to learn more about their heritage. Our hope was to play a small part in the genocide centennial commemorative activities through education. We progressed beyond our goals, turning into a resource in six languages that will be available to all for years to come.

Finally, we hope that, when you meet a little piece of Armenia in any corner of the world, you celebrate our remarkable legacy together.