The defining national event of Australia and New Zealand took place in the shadow of the Armenian Genocide.

Australia and New Zealand are the latest members of the Armenian Diaspora. Although some individual Armenians did find their way to that part of the world in the preceding centuries, it was not until the 1950s that there was sustained movement in that direction. Organised communities came to be formed in Sydney and Melbourne, with individuals and families in other parts of Australia, and Armenian individuals and groups in New Zealand as well.

Needless to say, the economic development of Australia and New Zealand over the course of the 20th century attracted immigrants from all over the world, including Armenians from the Middle East and India. The end of British rule in India in 1947 and various economic projects, such as nationalisation, led many Indian-Armenians to move away from their Calcutta stronghold in the decades that followed. More recently, Armenians from Armenia itself have also made their way Down Under.

Although a more recently-settled Diaspora community, Armenian roots in Australia and New Zealand run a bit deeper than it would seem at first glance.

Every year, ANZAC Day marks the great sacrifice that the people of Australia and New Zealand made during war in general, and in particular on the Gallipoli front during the First World War, in which the Australia and New Zealand Army Corps – hence, ANZAC – fought alongside the Allies. The objective was to push aside Ottoman troops in order to open a path to the capital, Constantinople (Istanbul). The campaign was a profound failure, resulting in tremendous loss of life. But it also resulted in the forging of an identity that was truly national, that brought the people of Australia and the people of New Zealand together in a way that centuries of settlement and colonisation had not managed.

ANZAC Day is marked every year on the 25th of April, which was the day in 1915 that the soldiers landed at the Dardanelles – exactly one day after the Armenian Genocide began. Among the numerous accounts of the horrors of the Armenian Genocide are memoirs of ANZAC troops and prisoners of war.

Today, Turkey and Australia both commemorate that highly decisive battle in their respective histories, but certain elements of the context of that war are often set aside. The Armenian community of Australia tends to use the ANZAC argument in its own discourse on the Armenian Genocide. The support the community has received has resulted in such repercussions from Turkey as the prohibition of Australian public figures in commemorations of ANZAC Day at Gallipoli itself. This banning of Australian politicians from Turkey, it is important to note, is in the run-up to what will be the centennial of both the Armenian Genocide and the ANZAC landing in 2015 – a solemn turning point in the history of the Armenians, and in the history of the people of Australia and New Zealand. 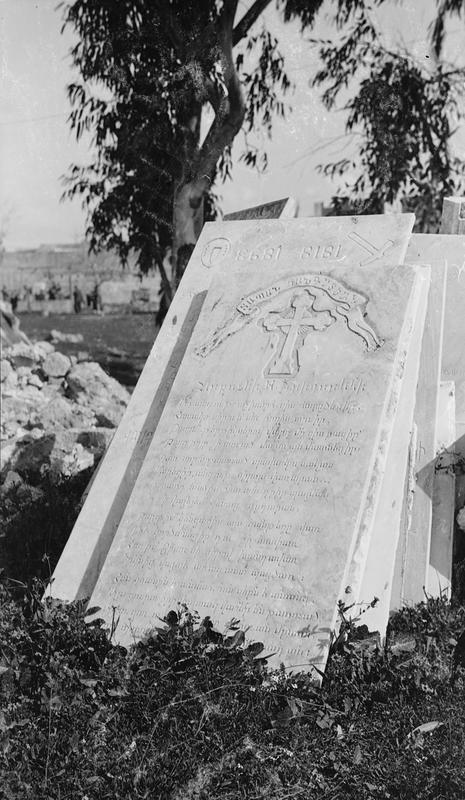 “Not a single grave was left untouched by the Turks and not a single tombstone was left standing. Many marble monuments had been taken away and apparently the New Zealanders arrived just in time to prevent the removal of those that remain.”
The Armenian Cemetery at Jaffa, not too far from Jerusalem, photographed by George Westmoreland; part of the UK’s Ministry of Information First World War Official Collection.