Turkey’s economy today is based in part on confiscated Armenian property.

The most immediate association that comes to mind with the Armenian Genocide is the massacre of many individuals on a large scale. Add to that the deportations, the death marches, and the narrative of a general national loss becomes sealed in the collective memory and consciousness of the Armenian people.

There is another side to the story, however, one that has come increasingly to light in recent years. What happened to what the Armenians left behind? Individual homes, entire villages. Tables and chairs, fields and orchards. Books and clothes.

The confiscations of Armenian property began with the massacres of the 1890s, peaked during the Armenian Genocide between 1915 and 1923, and even continued into the decades of the Republic of Turkey that followed. The basis of many parts great and small of the economy of Turkey today can be traced back to these confiscations. The bourgeoisie – the middle class, professionals, or merchants – did not feature many Turkish names in the Ottoman Empire of 1915. Such wealthy families as the Sabancı and the Koç in today’s Turkey, with their multi-millions-worth industrial empires, have their roots in Armenian enterprises of the early twentieth century.

The Armenians who were deported were asked to make an inventory of their property, which was to guarantee its safeguarding for the duration of the First World War. Instead, the twenty thousand or so buildings and over a million acres of agricultural land were left in the hands of either the local population or those who arrived in Anatolia and Asia Minor from the Balkans and the Caucasus after the war. The project to create a new Turkish nation-state, assimilating the entire Muslim population into the Kemalist vision – whether that population was Kurdish or Bosniak, Circassian or Laz – was made possible at least in part due to all that was left behind by the Armenians and others who were killed or made to leave.

Discriminatory policies and unfavourable legislation provided the legal cover to take over, destroy, or re-arrange property in Turkey both during the genocide and well after. It is only in recent years that studies have been done and action is being taken in order to restore at least some of what has been lost or to provide compensation. The most active such work is being led by the Hrant Dink Foundation in Istanbul, which has prepared a comprehensive survey of Armenian property claims from the era of the Turkish Republic.

Another element of economic fallout stemming from the Armenian Genocide involved life insurance claims brought up by lawyers and other descendants of survivors in the early 2000s. The issue remains a controversial one, both in legal and political terms. The memoirs of Ambassador Morgenthau, who represented the United States in the Ottoman Empire in 1915, include a demand made by one of the Young Turk leaders and chief architect of the Armenian Genocide, Talaat Pasha, on taking over the life insurance policies on behalf of the government, since the Ottoman Armenians were “practically all dead … and have left no heirs to collect the money”. 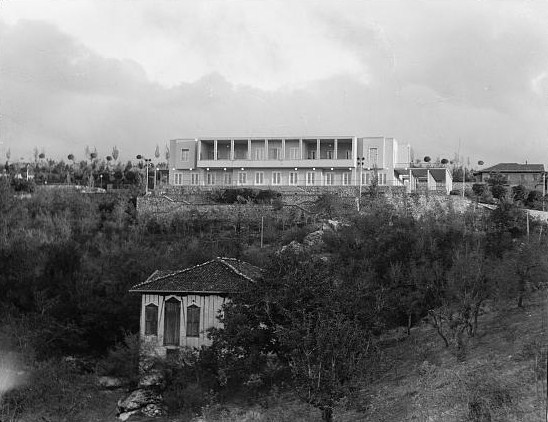 The presidential palace of Turkey, known as Çankaya Köşkü, photographed in 1935 in Ankara; the land and the seized building used to belong to one Ohanes Kasabian.