The Armenian Genocide has been formally marked by many parliaments, governments, heads of state, as well as scholars and academic and non-profit organisations.

Since the 1960s, one of the central activities of organised Armenian Diaspora communities all over the world has been to publicly mark the Armenian Genocide in their countries. This can mean anything from having a politician deliver a speech, to having a local council or national parliament adopt a resolution, holding rallies, and establishing public spaces or bodies such as monuments, museums, or research institutions dealing with the Armenian Genocide.

The country to set the precedent of having a national parliament adopt a resolution on the Armenian Genocide was Uruguay in 1965, followed by Cyprus in 1975*. The US Congress, meanwhile, adopted two statements – Joint Resolution 148 in 1975 and Joint Resolution 247 in 1984 – declaring the 24th of April of those years as the “National Day of Remembrance of Man’s Inhumanity to Man”, authorising and requesting the president “to issue a proclamation calling upon the people of the United States to observe [that] day as a day of remembrance for all the victims of genocide, especially those of Armenian ancestry who succumbed to the genocide perpetrated in 1915, and in whose memory this date is commemorated by all Armenians and their friends throughout the world”.

US President Ronald Reagan, for his part, marked the Jewish Holocaust in April, 1981, with a speech that included the following sentence: “Like the genocide of the Armenians before it, and the genocide of the Cambodians which followed it – and like too many other such persecutions of too many other peoples – the lessons of the Holocaust must never be forgotten.” Kenneth L. Khachigian, an Armenian-American and Reagan’s speechwriter at the time, made sure that both the National Security Advisor and his deputy approved of that wording.

Why the precaution? Because just using that word – genocide – stirs up all sorts of reactions in Turkey, with possible diplomatic and economic fallout. It has been since Armenia’s independence in 1991 that many other national parliaments have passed resolutions recognising and condemning the Armenian Genocide – Argentina, Russia, Canada, Greece, Lebanon, France, Slovakia, Switzerland, Poland, Chile, and others. Various European bodies have likewise done so, as has the Vatican. A report on minorities by the UN in 1985 mentions the Armenian Genocide. The International Association of Genocide Scholars adopted a resolution in 1997 on the Armenian Genocide, as did the Human Rights Association of Turkey (Istanbul Branch) in 2006. These and many other organisations all agree that a genocide of the Armenian people took place in the final years of the Ottoman Empire, alongside a great many other regional governmental and non-governmental bodies, as well as prominent individuals.

Back in America, it is still not enduring federal policy of the United States to affirm the Armenian Genocide. US presidents tend to make a commemorative statement around April 24th every year, while making sure to avoid use of “the g-word”. Still, it can be noted that 43 out of 50 state houses or governors have officially marked the Armenian Genocide through resolutions and proclamations, mostly during the 1990s and 2000s.

*Researcher-scholar Alexander-Michael Hadjilyra wrote in from Nicosia to say that Cyprus first passed a resolution on the Armenian Genocide in 1975, not in 1982, as was previously noted above (with an additional resolution in 1990). Through his own research in the minutes of the House of Representatives, Mr. Hadjilyra discovered this not widely known fact. For more information on the Armenian community of Cyprus, have a look at various publications by Mr. Hadjilyra in English and Greek, available at https://www.scribd.com/collections/2967266/Armenian-community-of-Cyprus.

The team at The 100 Years, 100 Facts Project would like to thank Mr. Hadjilyra for his feedback. 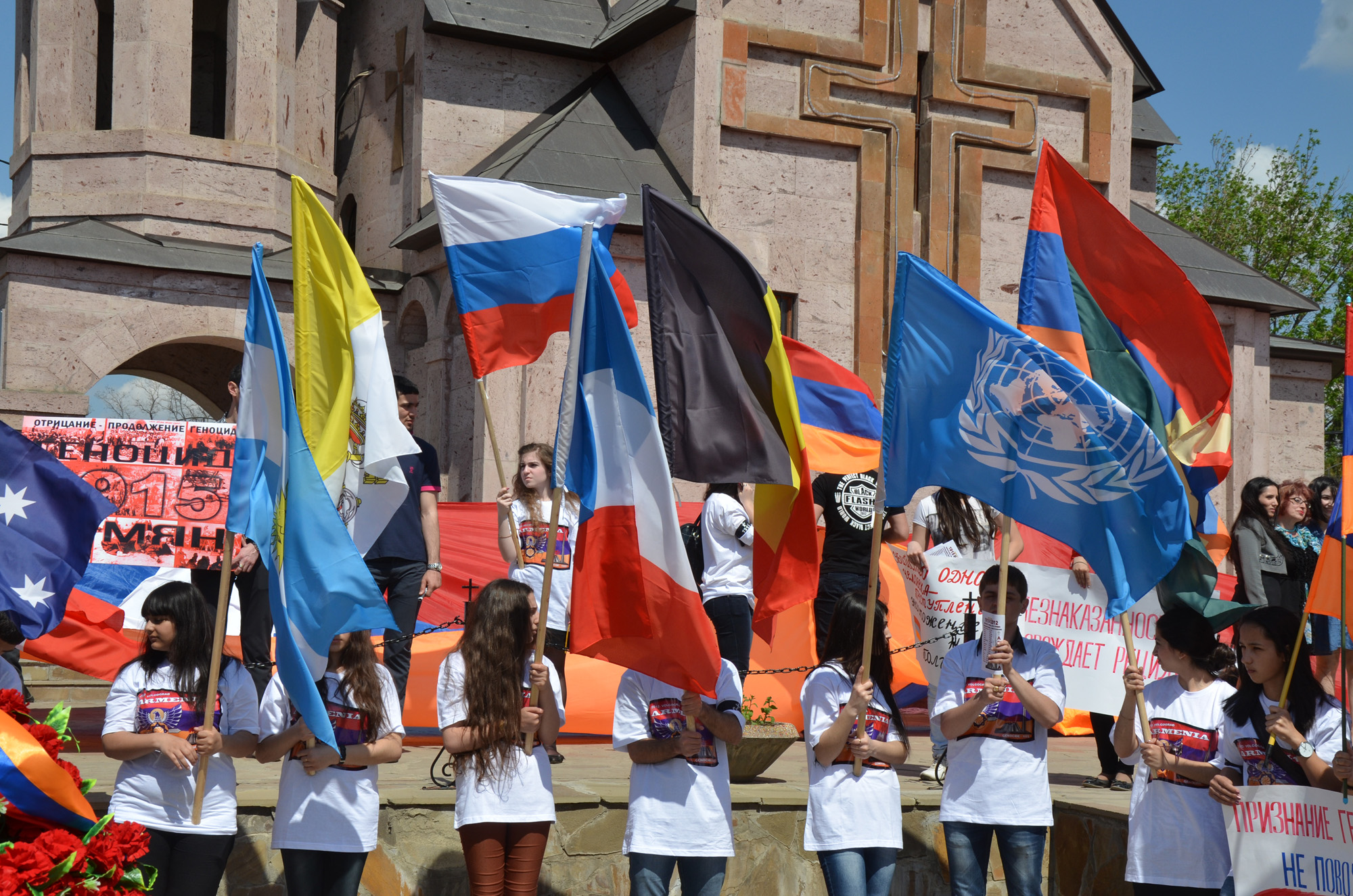 Commemorations in Volgograd, Russia, in 2012, including flags of countries that have recognised the Armenian Genocide and the UN