Traditional Armenian folk dances include creations of the Diaspora.

The Armenian heritage embraces the art of dance, one of the elements of any national culture. Many of the territories long-inhabited by Armenians each had their own dances or local variants of more widespread dances. Needless to add, the dance traditions of Kurds, Turks, Greeks, Georgians, Azerbaijanis, and others, share much in the regional cultural legacy.

Perhaps the characteristic that most immediately sets Armenian dances apart is their group nature. That is, “Armenian dance” often implies a circle dance, or “shoorchpar” (“shoorchbar”, in Western Armenian pronunciation). Community events – weddings in particular – more often than not feature men and women standing shoulder-to-shoulder or pinky-to-pinky, with the leader brandishing a coloured handkerchief, stepping and jumping back and forth and left and right, following the rhythm and beat, the movements dictated by that particular dance. Armenian dances include themes that range from agriculture, such as planting or collecting the harvest, to lamentations or celebrations, to military activities or the hunt.

The Tamzara and the Daroni, among so many other dances, can have complicated combinations of moves. It’s no surprise that Armenian Diaspora community organisations tend to feature dance groups for these traditions to be carried on to the new generation. The Armenian-American community in particular – one that had an early and robust influx of Armenians fleeing the Ottoman Empire – managed to come up with Diaspora dances of its own in the mid-20th century, such as one called the Michigan Hop . They were the generation that survived the genocide, arriving from regions spanning the Black and Mediterannean seas, and interacted with compatriots now by the San Francisco or Massachusetts bays.

An Armenian dance that is performed a great deal today is the Kochari. This dance has rougher, more pronounced movements, being more of a male domain, and is said to have roots – as with many other Armenian dances – in ancient, pagan culture. The Kochari is indeed a popular feature in repertoires, whether of Armenian community groups in Los Angeles or Moscow, or professional ensembles in stages across Europe and the Middle East. Traditional costumes are often worn by dance troupes to add another layer of heritage when showcasing Armenian culture at home or abroad. However, the participants were in jeans and t-shirts during a Kochari dance performance by a group on the streets of Buenos Aires as an Armenian Genocide awareness flashmob which took place in 2011.

The circle dance tradition was raised to a national, or even international, level in 2005, with an attempt at a Guinness record for the largest, longest such dance, as thousands gathered on the 28th of May that year around Mount Aragats, the highest peak on the territory of today’s Republic of Armenia. Although the record was not set, Armenians from the homeland and the Diaspora did come together and step in unison in unprecedentedly large numbers on that occasion.

The Kochari flashmob in Buenos Aires, 2011 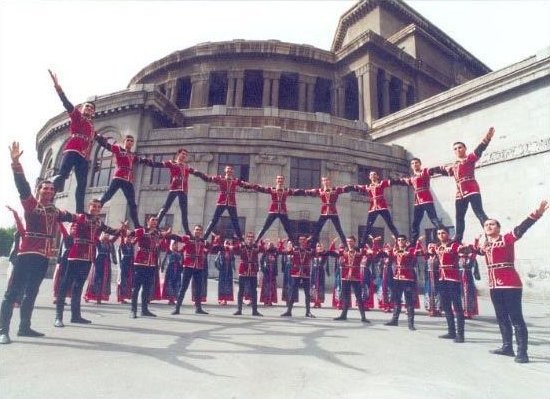 The Bert, or “Fortress” – a dance with a clearly descriptive name, being performed by a group of that same name, in front of the Opera House in Yerevan, Armenia.

By The Dance Ensemble “BERT“, via Wikimedia Commons