Missak Manouchian was a leader of foreign Resistance fighters in France during World War II.

The battlegrounds on the frontlines of the Second World War were a contrast to most cities of France under Nazi occupation, which did not see too much bloodshed. However, France did experience a lot of violence led by Resistance fighters who targeted individual Nazi leaders or outposts within the country. The Resistance included various groups that led efforts to undermine or harm Nazi operations in the country, including bombings, assassinations, guerilla warfare, or sabotage, while also gathering intelligence for the war effort or publishing underground newspapers. Among the various groups of the Resistance was the Francs-tireurs et Partisans – Main d’œuvre immigrée, “Irregulars and Partisans of the Immigrant Workforce”, a trade unionist organisation comprised of foreigners.

One of those foreigners was Missak Manouchian. Born in Adıyaman in the Ottoman Empire in 1906, Manouchian and his brother survived the Armenian Genocide, ending up in Syria before moving on to Marseille in 1925. Trained in carpentry and a committed worker, Manouchian was known in Armenian circles as a poet and a literary figure, spearheading two cultural magazines in the French-Armenian community and editing a third. His militant communist activities got him arrested early on in the war, but he was released, and soon after joined the Resistance.

Missak Manouchian came to be in charge of a group of 23 fighters – including a second Armenian, Arpen Tavitian, numerous Jews from Poland, Hungary, and Romania, as well as individuals from Spain, Italy, and also France – carrying out assassinations and other attacks over the course of 1943. They were arrested in November of that year and executed by firing squad on February 21, 1944.

The Manouchian Group is celebrated as the subject of the Affiche Rouge, “Red Poster”, plastered across France in March, 1944. It was meant to be an act of propaganda, serving as a warning sign to foreigners and Jews supporting the Resistance. The poster includes pictures of ten members of the group, encircled in black, over a field of dead bodies, sabotaged railways, and weapons. The pictures are arranged in an inverted pyramid, at the top of which is “Manouchian – Arménien – Chef de Bande” , with 56 attacks, 150 killed, and 800 wounded attributed to him.

This poster, along with a published final letter by Manouchian to his wife Méliné Assadourian, inspired a poem by Louis Aragon, later turned into song by Léo Ferré. “The Army of Crime” – as the poster described the group – was also the title of a film produced in 2009 about this chapter of French Resistance history.

Some excerpts from Manouchian’s letter to his wife are presented below (translated by Juliette M.):

I joined the Army of Liberation as a voluntary soldier and I die within inches of victory and of the objective. Happiness to those who will survive us and enjoy the Freedom and Peace of tomorrow. I am sure that the French people and all those who fight for freedom will know how to honour our memory with dignity. At the moment of death I proclaim that I have no hatred for the German people and for whomsoever, everyone will have what he will deserve as punishment and as reward. The German people and all the other nations will live in peace and brotherhood after the war, which will not last much longer.
…
I will soon die with my 23 comrades with the courage and the serenity of a man with a very clear conscience, for personally, I haven’t done any harm to anybody and if I have, I did it without hatred. Today is sunny. It is while looking at the sun and the beautiful nature that I loved so much that I will say farewell to life and to all of you, my beloved wife and my beloved friends. I forgive all those who did hurt me or those who wanted to do so, with the exception of the one who betrayed us to save his life and those who denounced us. Lots of love to you and to your sister and all the friends who know me, near and far, I hold you all in my heart. Farewell. Your friend, your comrade, your husband.

~~~
Thank you to reader Garo Derounian from Lebanon for writing in about a great find about Missak Manouchian. Mr. Derounian sent us a photo of Manouchian from the early 1920’s in an orphanage in Jounieh, Lebanon (previously Syria). Manouchian is the orphan child with a cross on his clothing.

The team at The 100 Years, 100 Facts Project would like to thank Mr. Derounian for submitting this photograph. 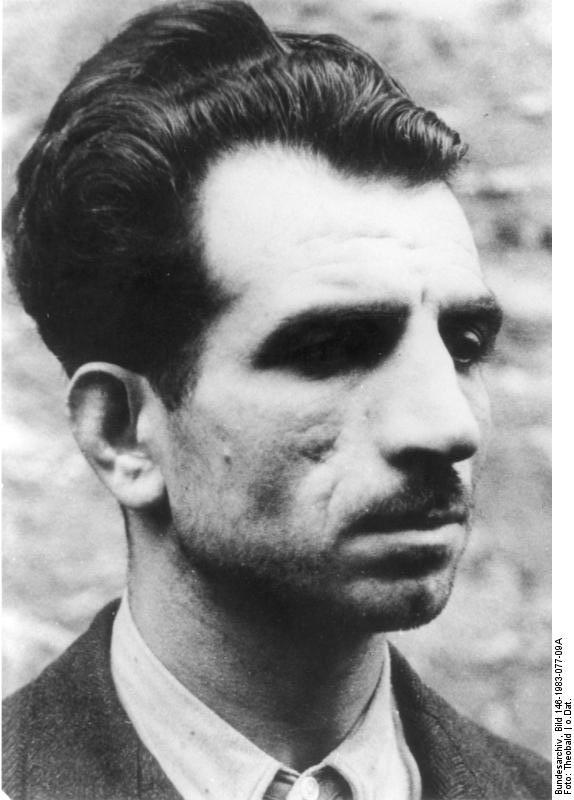