Armenian migration towards Latin America took place mostly between the 1920s and 1950s.

The Armenian presence in Latin America has a relatively young history. Some movement towards Brazil, Uruguay, and Argentina is recorded in the 19th century and early 20th century, but most Armenians ended up in that part of the world after the genocide. A large part of Armenians of South America are descendants of arrivals from the region of Cilicia, around the south-eastern coast of Turkey today, typically being involved in trade and in the manufacturing of shoes. Very little influx of Armenians has taken place towards Latin American since the peak in migration in the 1920s, leading up to the 1950s. As a result, today’s generation of Armenians there are Spanish- or Portuguese-speakers first. Still, with the usual Diaspora elements of church and school, club and newspaper or radio, Armenian life goes on in the main centres of Buenos Aires in Argentina, São Paulo in Brazil, and Montevideo in Uruguay, alongside smaller communities in Caracas (Venezuela), Santiago (Chile), and elsewhere.

Uruguay, in fact, is famous in the Armenian world for being the very first country to adopt a resolution recognising the Armenian Genocide, all the way back in 1965, fifty years after 1915. In addition, an official of that country hinted some support in 2011 towards recognising the independence of Artsakh (Nagorno-Karabakh).

The Armenians are a prominent community in Brazil as well, as the many millions who pass through the “Armênia” metro station in São Paulo are reminded. They are well-represented in the spheres of business and politics in that country, while other areas are not without an Armenian presence. A younger name in the Brazilian-Armenian community today, for example, is Krikor Sevag Mekhitarian, who won the national chess championship in 2013.

It is by far Argentina, however, which the greatest number of Armenians in Latin America call home. Buenos Aires also has a square and a street named after the old country, alongside numerous churches, schools, and restaurants that serve the community. Argentina is also the source of some key investments in the Republic of Armenia today, including the Zvartnots International Airport, the postal service, as well as involvement in the agricultural sector.

The mark of this people in the Western Hemisphere is also made by a number of cities and towns called “Armenia”, most notably Armenia in Colombia (aptly famous for its coffee, by coincidence), as well as Armenias in El Salvador, Guatemala, Honduras, and Ecuador. Although rumours persist of being named for Armenia or Armenians in tribute of the Hamidian Massacres of the 1890s, it is more probable that colonists in those countries took to the Bible in some cases in naming their settlements.

There is also an Armenian presence in Mexico – small, but still with some clout, as a recent controversy over an Azerbaijani-funded park and statue in Mexico City demonstrated. Arturo Sarukhán, to cite another Mexican-Armenian name, served as the country’s ambassador to the United States from 2007 to early 2013. He is considered to be the first diplomat in Washington to adopt Twitter as an outreach tool. Another representative of Armenians in Mexico, Marie Pishmish, who was one of the first women to graduate from Istanbul University, was a central figure in establishing and developing the science of astronomy in Mexico, teaching at the National Autonomous University in Mexico City for over half a century. 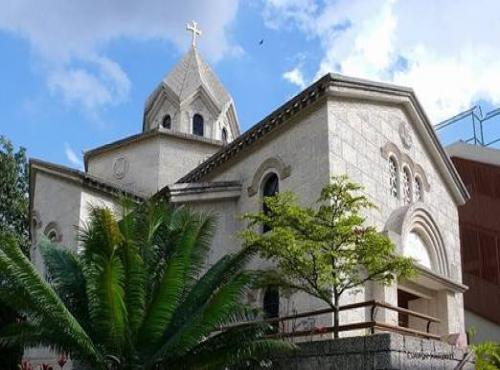 The St. Gregory the Illuminator Armenian Church in Caracas, the capital of Venezuela

By Ministry of Diaspora (Republic of Armenia) [Public domain], via Wikimedia Commons