Armenians were the first to adopt Christianity as a national religion, by tradition in 301 AD.

The Armenian homeland is not too far away in geographical terms from the Holy Land where Jesus preached and was crucified. In fact, there is even the tradition of one King Abgar of Edessa (later Urfa, Şanlıurfa in Turkey today) exchanging a letter with Jesus, inviting him to visit and perform his wonders there. Jesus promises to send someone from among his followers. And, indeed, after the events recorded in the Bible, two of the apostles – Thaddeus and Bartholomew – are considered to have spread the Gospel to the north, in Anatolia, Asia Minor, and towards the Caucasus mountains.

It took a few centuries, however, for Christianity as a religion to catch on. It was famously persecuted in the meantime, in particular within the Roman Empire, and also in the Kingdom of Greater Armenia, the ruler of which wore his own crown, though very closely tied to the empire. King Tiridates III (as he is known by his westernised name, called Trdat or Drtad in Armenian), himself educated in Rome, made sure that the followers of Christ were not free to maintain their religion in the land under his rule, being subject to punishments, torture, and the like. He is noted for the martyrdom of the nuns Hripsime and Gayane and the group that they led which had fled Rome to escape the persecutions of Emperor Diocletian.

One worshipper of Christ was a man named Gregory, from a noble house, a family that had for its part been subject to the harsh reign of Tiridates for political reasons. Gregory received his education in Caesarea (Kayseri in Turkey today) later to be ordained a bishop there. He eventually offered his services to the king back in Armenia, but his lineage and religion were found out. Refusing to bow before the idol the king and his court were worshipping landed him in the Khor Virap – a “deep dungeon”, now the site of a church – where he was kept for thirteen years. The traditions include angelic visitations and secret assistance by both Christians and pagans keeping him alive during that time.

When King Tiridates fell ill and could not be helped by anyone in the land, it fell to his sister, Khosrovidoukht, who had had a vision to have Gregory released and have him cure the king through prayer. As a result, Tiridates converted to Christianity – and had the entire kingdom do the same. St. Gregory the Illuminator, as he is now known (Sourp Grigor Lousavorich in Eastern Armenian pronunciation, Sourp Krikor Lousavorich in Western), served as the first Catholicos, the head of the Armenian Church, ushering in a major turning point in Armenian history.

Certainly a fair few elements of this story are of traditional value more than bearing strict historical accuracy. The date of the Armenian conversion – 301 AD – is likewise one against which arguments exist. The Roman Empire is considered to have publicly allowed for Christian worship about ten years after that date. In all events, the tradition accepts that the Armenians were the very first people to adopt Christianity as a national religion, and that aspect of the Armenian identity remains a key marker to this day.

Nadine Arzumanian of Toronto, Canada, wrote in to add: “St. Gregory’s legacy spread well beyond historical Armenia.Nuns fleeing the city of Constantinople (modern-day Istanbul) during the Middle Ages smuggled some of St. Gregory’s relics with them. They made it as far as Naples, where a church named after that saint remain to this day. The Chiesa San Gregorio degli Armeni consists of a church and monastery connected by a notable belltower that rises over the narrow street. It can be found on Via San Gregorio degli Armeni, which is located in the heart of Naples – the Centro Storico (Historical Centre), a very popular tourist destination. The street is world-famous for markets selling hand-made figurines of the traditional Christmas nativity scene.

The team at The 100 Years, 100 Facts Project would like to thank Ms. Arzumanian for her feedback. 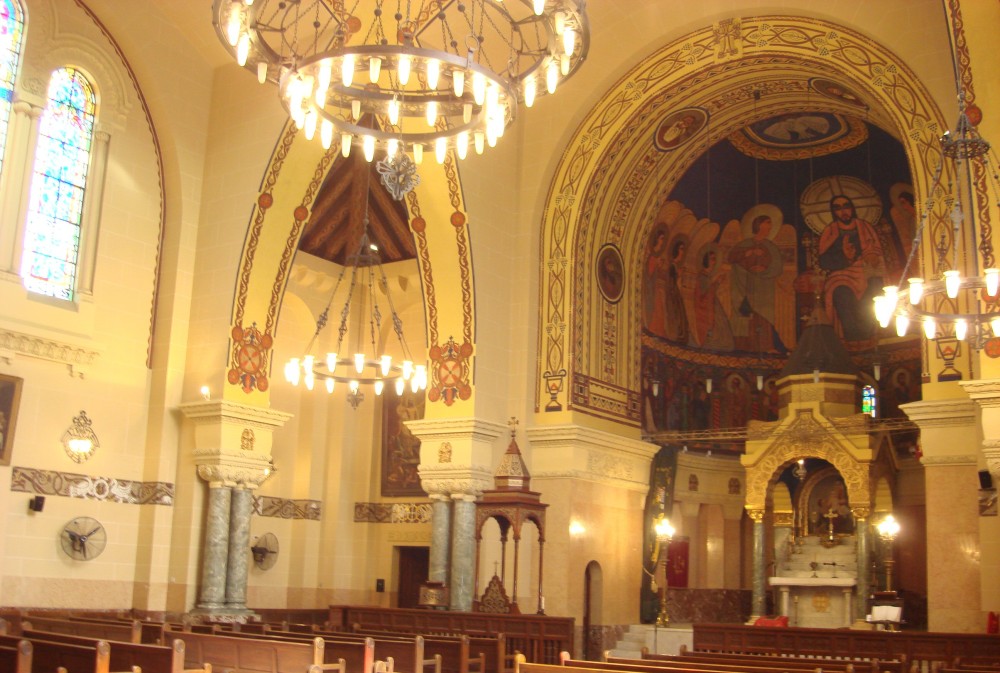 The interior of one of numerous Armenian churches across the world named for St. Gregory the Illuminator, this one in Cairo, Egypt.

By Alfred Khazarian (Own work) [CC-BY-SA-3.0 or GFDL], via Wikimedia Commons