A near neighbourhood to historical Armenia is the Arab world. There are records of ancient contacts between these peoples, besides the experience of the Armenian kingdom that flourished in Cilicia, on the south-eastern coast of Turkey today, during the 11th-14th centuries AD. Over the course of hundreds of years, Armenian merchants and pilgrims alike had set foot, set up shop, and settled churches dotting through today’s Syria, Lebanon, and Egypt. In more recent times, the Armenian Genocide made those countries the first Diaspora homes for hundreds of thousands of Armenian refugees.

The ancient city of Aleppo in the north of Syria has an old Armenian Quarter that dates from at least the 17th century, while the Church of the Holy Mother of God was constructed some two centuries earlier. Aleppo (or Haleb) is often referred to as “the mother colony” – the original modern Diaspora centre – due to its proximity to what became the Syrian-Turkish border. The city was often the first stop for much of those from southern and eastern Anatolia who survived the massacres and deportations of 1915. Aleppo became an active and vibrant centre of Armenian life in its own right throughout the 20th century and into the 21st, alongside the capital, Damascus, as well as a number of other small and large communities scattered throughout Syria, including some very ancient settlements that date back to Cilician times in the north-west of the country (Kessab and the surrounding region). Syria is also the only country in the world to host a museum and memorial to the Armenian Genocide that comes close in poignance to the one in Armenia itself – the monument at Deir-Zor in the north-east marking the end point and final resting spot on the death marches through the Syrian desert. Only recently, following the civil unrest plaguing Syria, has the Armenian population dwindled and have community activities become more limited there, as most notably highlighted in the Armenian media during 2014 with events in Kessab and Deir-Zor.

Lebanon next door can claim to have been the capital of the Armenian Diaspora until its own civil war of the 1970s and ’80s. With a large Armenian population and the freedom of religion and education arguably unparalleled anywhere else, Beirut became the hub of numerous Armenian organisations whose influence stretched throughout the Diaspora, including churches (the Catholicos of the Great House of Cilicia being located in Antelias, a suburb of Beirut – check out our fact on it), schools (including the only university of the Diaspora – check out our fact on the Rocket Society that ran there in the ’60s), publishing houses, theatrical troupes, sporting and scouting organisations. Armenian literary life in particular bloomed in Beirut for many decades, and the city still boasts some newspapers and other publications in Western Armenian. The Beirut suburb of Bourdj-Hammoud could have been referred to as a whole new, reinvented Armenia for two or three generations. Today’s Armenians of Lebanon still form a significant segment of society in that country, playing an active role in politics and society, arts and culture, and business and industry. Many “second Diaspora” Armenians in the West trace their roots to Lebanon, and also to Syria.

And to Egypt as well. The most populous player in the Arab world has been home to more than a few influential Armenians. As a matter of fact, Islamised Armenians have held very high leadership positions in Egypt in centuries past, whereas, in more modern times, Nubar Nubarian was appointed the first prime minister of Egypt in 1878. His son, Boghos Nubar, was instrumental both in the creation of the Armenian General Benevolent Union (AGBU) in Cairo in 1906 – one of the most influential Armenian Diaspora community organisations – as well as in negotiating on behalf of the Armenians in the aftermath of the First World War. An Armenian community continues to exist in Cairo and Alexandria today, although the instability in Egypt in recent years has reduced numbers.

Elsewhere in the Arab world, regional issues have proven less than conducive for the Diaspora to gain ground over the past half century and more. The Armenian presence in Jordan, for example, largely consists of smaller numbers, almost all descendants of Armenian Genocide survivors, even though the community in Amman has also been connected with the older Armenians of Jerusalem in times past. Some of the history of the Armenians of Iraq likewise goes back to ancient Assyria and Babylon, but most of the community there revolves around churches and schools set up after the genocide, many having suffered during the past decade of conflict. Meanwhile, an Armenian presence has been building in the cities on the Gulf (Kuwait, Dubai, Sharjah, Abu Dhabi, Doha, etc.) for a few decades now – a new “second Diaspora”, this time continuing on through the Arab world. 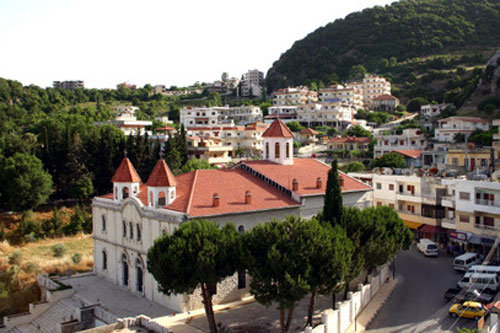 A photograph of the Armenian Evangelical Church in Kessab, in the north-west corner of Syria, currently in ruins; a holdover from Armenian Cilicia, Kessab and its surroundings have for centuries been home to Armenians, most of whom had to flee during the summer of 2014 when the area came under attack.