The first oil well in Baku was drilled by Ivan Mirzoev (Hovhannes Mirzoyan) in 1871.

Tiflis (Tbilisi) to the north – the capital of Georgia today – had been since the middle ages a not insignificant Armenian Diaspora centre, with an immense boom in terms of society, culture, and politics in the 19th century. Baku to the east – the capital of Azerbaijan today – took that 19th century and ran with it well into the 20th, turning that city into a major economic powerhouse of the Diaspora, with some politics and culture thrown in as well.

The Armenian presence in Baku took shape in the early-to-mid-1800s, as the Russian Empire expanded into the region on the western shore of the Caspian Sea. Oil drove development on the Absheron peninsula where Baku is located. It was Armenian entrepreneurs that really got the oil industry going, alongside Russians and Europeans certainly, as well as local inhabitants. Big names such as Mirzoev, who was the first to successfully drill for oil in 1871, or Mantashev, Lianozov, Tsaturov, or Adamov, turned into some of the wealthiest individuals of their generation, competing with the Rothschilds and the Nobels, to name just two other players in the Baku oil fields.

Interest came from the emerging Armenian bourgeoisie in other places at first, with home-grown Armenians slowly becoming a part of the fabric of the city in the years that followed. Baku ended up with at least three Armenian churches and a number of schools. In general, the very first publications of books and newspapers in that city took place through the efforts of Armenians, as was the establishment of the first library. A number of iconic works of architecture of that city – public buildings, private residences – were commissioned or designed by Armenians in the late 19th and early 20th century.

All was not always well, one must note. The 1900s and 1910s especially saw inter-ethnic clashes on more than one occasion, following the general instability arising from the Russian Empire’s own internal troubles – and foreshadowing similar events as the USSR would collapse decades later.

Meanwhile, Baku was renowned for its cosmopolitanism. One indication of that was the Baku Commune of the 26 Commissars from different backgrounds, led by Stepan Shahumyan, that briefly ruled the area in the chaotic aftermath of the Russian Revolution of 1917. They were displaced by another multi-ethnic group, likewise including Armenians, before the Ottoman and British occupations, followed ultimately by Sovietisation.

It was during the Soviet years that the many citizens of that city forged a new Bakuvian identity – Russian-speaking and secular – which included hundreds of thousands of Armenians. As the movement for Nagorno-Karabakh turned violent and in particular following the pogroms of the Armenians of Baku in 1990, a majority of the Armenians that had made that city their home for three or four generations fled to Armenia, to Russia, and to the West. There are estimations from hundreds up to tens of thousands of ethnic Armenians still living in Baku and elsewhere in Azerbaijan, mostly those married to Azerbaijanis. But given the tense political situation in the region, free expressions of Armenian identity are severely limited in that country today. 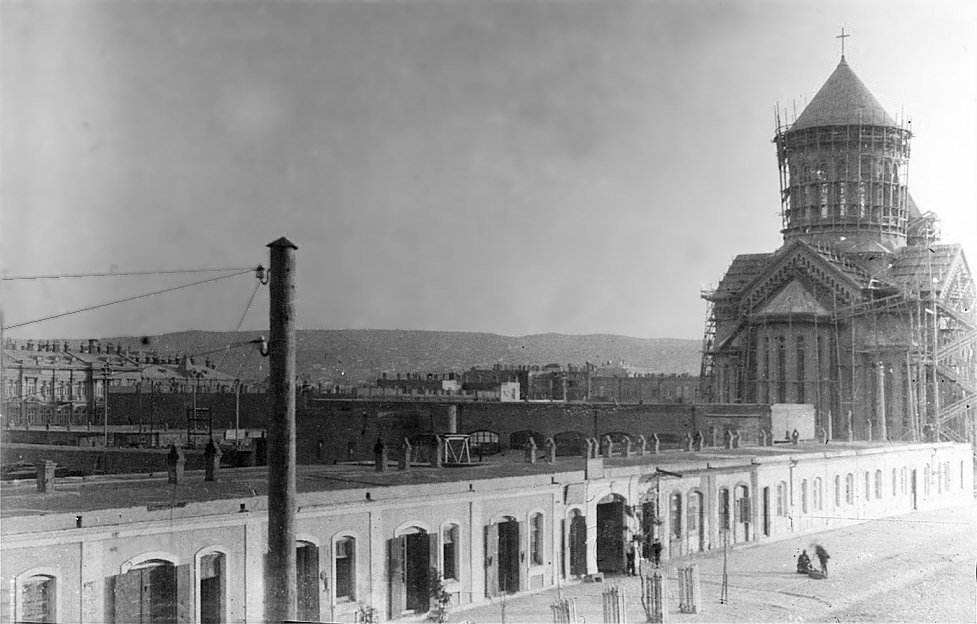 The St. Thaddeus-St. Bartholomew, or Budagovskiy, church – designed by Hovhannes Katchaznouni, who would serve as the first prime minister of Armenia in 1918-1919 – under construction in Baku in 1910-1911; it was torn down in the 1930s.