“Boxer Mardo” Gozukutchukian was crowned Near East Heavyweight Champion in Jerusalem in 1940.

Religious life is unsurprisingly an immediate association when it comes to Armenians in the Holy Land: the formal presence of the Armenian Church in Jerusalem can be traced back to as early as the 7th century AD, with evidence of activity dating from centuries prior – even to before Armenia itself becoming Christian. In fact, the most celebrated king of Armenia, Tigran the Great, briefly extended his rule in the 1st century BC all the way to Judea. Of course, Christianity was later the major factor that would motivate pilgrims – and, indeed, traders – to make the trek from the Armenian highlands to the Holy Land in the centuries that followed.

There is more to the Diaspora in Jerusalem than just the Armenian Patriarchate there, however. (Check out our entry on the Armenian Brotherhood of St. James for more on the patriarchate.) The fact that Jerusalem has an Armenian Quarter alongside its Christian, Muslim, and Jewish quarters points to how the Armenian presence forms part and parcel of the history and culture of that city – one of a handful of such communities, it can be said. For centuries, a big chunk of the Armenian population did include priests or those studying for the clergy, but trade and craft were never too far behind. Actually, the existence of the Armenian Quarter owes much to a Crusader-era ruler of the Holy Land, Queen Melisende of Jerusalem, who ruled the region in the 12th century. Her father was a European nobleman, but she had an Armenian mother and an Armenian upbringing in Edessa (Urfa, or Şanlıurfa today).

The 20th century saw big changes for the Armenians in and around Jerusalem, as the genocide brought in thousands of refugees. These individuals outnumbered the older Armenian inhabitants of Jerusalem – the kaghakatsis (“city-dwellers”, “citizens”) – who had integrated over generations enough to have Arabic as their first language. Many of them had achieved high positions both in the local administration, as well as in a number of diplomatic missions of Western countries. Those fleeing the Armenian Genocide, referred to as “zuwwar” (Arabic for “guests” or “visitors”), gave a boost to the number of Armenians in Jerusalem, Bethlehem, Jaffa and other cities and towns, until the establishment of the State of Israel in 1948 and also the Six-Day War of 1967 – both events leading to instability and emigration. In the meantime, a number of community institutions were founded, including social and cultural organisations, and athletics groups, resulting in vibrant Diaspora life. One name to come out of Armenian sports of the time was Mardo Gozukutchukian, or “Boxer Mardo”, who won the regional championship in 1940.

Special mention must be made of the tradition of ceramics and the role of Armenians in that field in Jerusalem. The British who took over that area after the Ottoman Empire collapsed brought in a number of Armenian ceramics specialists in 1919 from Kütahya (in western Turkey today), an old centre of tile manufacturing, to work on the outer wall of the Dome of the Rock – the central holy site of Jerusalem. Families remained and continued to produce decorated tiles and pottery, often with motifs of animals and plants or geometric designs, hand-painted in shades of blue and green. There are also ceramic street signs in the Old City of Jerusalem, likewise the work of Armenian master craftsmen .

The Armenian Diaspora has seen limitations in and around Jerusalem over the past half-century or so due to political instability in the region. Nevertheless, apart from religious life, community organisations continue to function, even with a depleted population. The past two decades have also seen some emigration of individuals and families from Armenia itself, by those who are partly or fully of Jewish background. 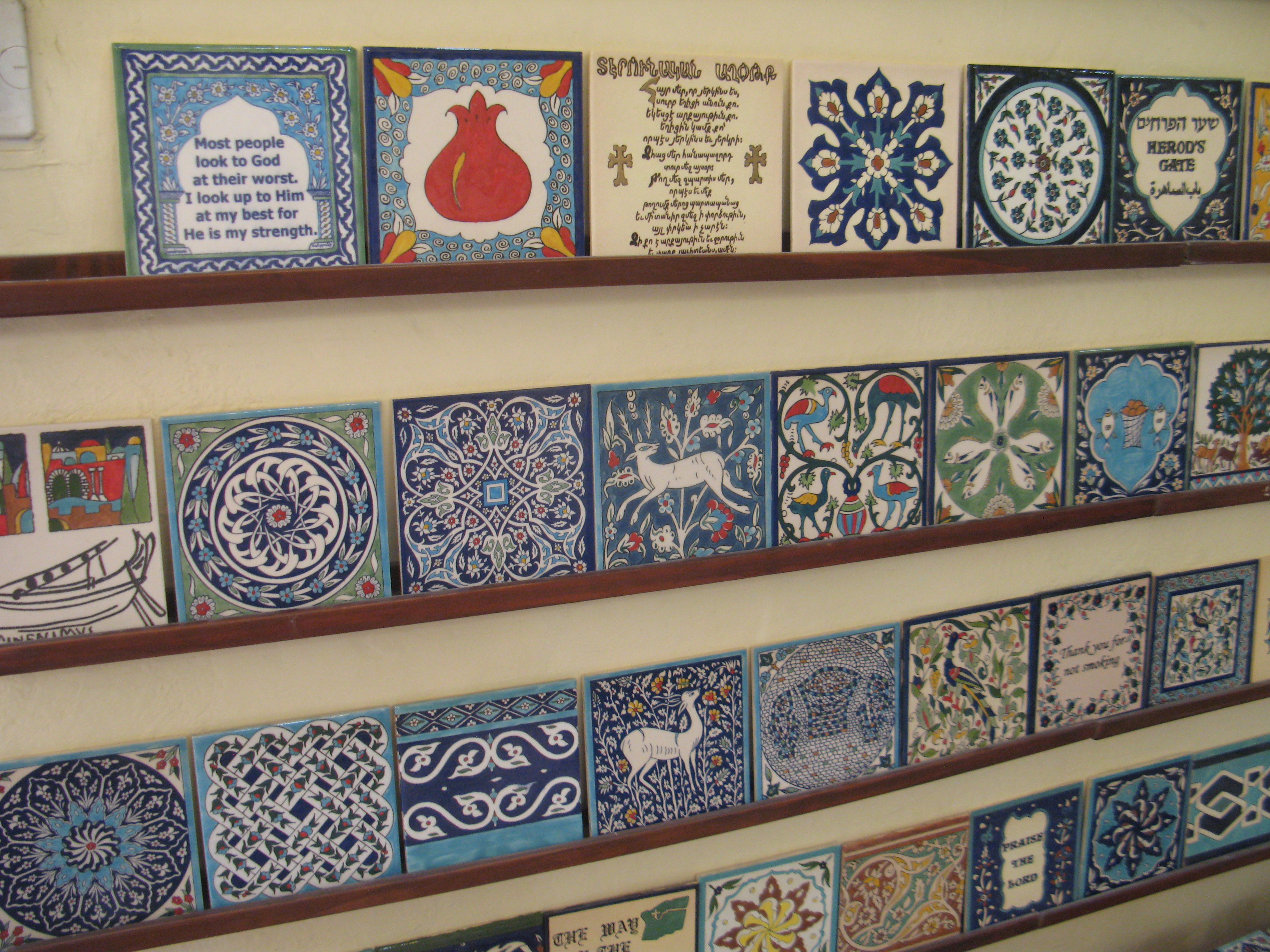 Samples of Armenian ceramics from Jerusalem.

By Lantuszka (own photo) [CC-BY-SA-3.0], via Wikimedia Commons