The Armenian epic of the Daredevils of Sassoun was first put down on paper in 1873.

When we think of the word “epic” today, it is often in the context of big-budget productions, including old and new classics ranging from Gone With the Wind to Star Wars – plenty of action, plenty of explosions, often high drama. That formula is a rather ancient one, however. Examples of epic poetry are to be found in many cultures, such as the Greeks with the Iliad, about the Trojan War, or the Indians and the Mahabharata, another story revolving around a colossal battlefield. Both of these works date back well over two thousand years. Later, medieval works include the Chanson de Roland or Beowulf, to give just a couple of examples from western Europe.

The Armenians have their own epic, namely the Daredevils of Sassoun, also known as David of Sassoun (“Sasountsi Davit” or “Tavit” in Armenian), among other titles. It is a long poem in four cycles (parts), following four generations of a family, of which David is the third, being preceded by Sanasar and Baghdasar, then the Great Mher (“Mets” or “Medz Mher”, also known as “Lion Mher”), ending with Little Mher (“Pokr Mher”). In keeping with epics all over the world, the story involves fantastic exploits and incredible adventures, within an overarching theme of good versus evil and fighting for justice.

Although the epic itself is dated to the 8th-10th centuries – especially as the struggle against Arab rule of that era is a clear detail – many elements of the Sassoun cycles involve far more ancient aspects, including relics of pagan Armenian culture. Popular memories of rivalries and battles between Armenian and Mesopotamian rulers a millennium before Christ may have been transformed in medieval times using the Caliph of Baghdad or the King of Egypt as the target instead.

It may be surprising to note that the Daredevils of Sassoun was not a known expression of Armenian culture in literature – certainly not when it came to works by the Armenian Church, but nor for other sources of written works in Armenian. There are records of it by Portuguese passing through the area in the 16th century, but it was not until 1873 that an Armenian bishop got around to writing it down. This was not an easy task, as the decades that followed revealed over 150 variations on the epic, which had been handed down orally for generations, for up to a thousand years at least. A recitation of the whole work must have taken days. This sort of performance has in fact survived and was included in UNESCO’s Representative List of the Intangible Cultural Heritage of Humanity in 2012. Over the past century and more, a number of different translations have been made in various languages and various forms. There are now scholarly collections of the numerous versions of the epic, as well as poetic renditions, in whole or in part.

David of Sassoun is today a prevalent feature in the popular culture of Armenia, but is often not as prominent in the Diaspora. The statue by the Yerevan railway station of David on his horse, made in 1959 by Yervand Kochar, is a compelling sculpture, at times used as a symbol for the city itself. Echoing that work, Fresno, California, has likewise gotten to feature David with his mount rearing for battle, when the sculpture by Varaz Samuelian was installed in that city in 1971. 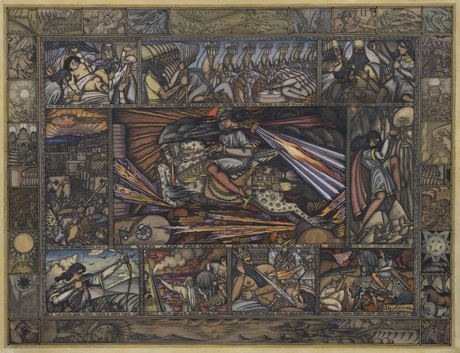