“Armenian Paper” is just one reflection of the long Armenian presence in Western Europe.

The Armenian presence in Western Europe is unsurprisingly an old and substantial one. How could the Diaspora keep away from – and avoid adding to – the great wealth and culture, education and technology, of which that part of the world has been at the forefront for the past so many centuries?

There are indications of individual Armenians making their way across the Black and Mediterranean seas rather early on. Among a few of many examples is that of an Armenian bishop who is said to have visited Tours in France in 591 AD. In addition, there is an Armenian alphabet inscription in a church in Tarascon, also in France, that testifies to a descendant of Mesrop Mashtots in that country – that, too, from before the 1200s at least, since that inscribed alphabet does not contain the final two letters which were later additions. To give one more example, there was a delegation from the Armenian Kingdom of Cilicia which found itself all the way out in Norway during the 13th century.

Other such one-time incidents aside, more widespread activity took place during and after the Middle Ages, which was when Armenian merchants plied the various trade routes and joined in the Age of Exploration in search of new products and new markets. They settled everywhere, from Venice, Italy to Cádiz, Spain to Bruges in what is Belgium today. The Armenian merchants of England later on were particularly renowned for their prowess in the textile trade. The oldest Armenian church in Britain dates from 1870 and is located in Manchester.

But it wasn’t just buying and selling goods that held the interest of the Armenians. Besides worship, the celebrated Mkhitarian Armenian Congregation, with its monasteries in Venice and Vienna, was heavily involved in publishing in the Armenian language – a piece of technology that made its way back to the homeland and the region, resulting in historical, pioneering printing work in the Middle East thanks to Armenian efforts.

A technology that went the other way around is known as “Armenian Paper” or, to use versions of its local European name, Papier d’Arménie or Carta D’Armenia. These are thin, accordion-shaped little sheets of paper covered in a resin, slowly burnt like an incense, used to generate a pleasant smell. Auguste Ponsot discovered this practice on his journey to Armenia at the end of the 19th century. Papier d’Arménie was subsequently featured at the International Exposition (World’s Fair) of 1889, in Paris, which was also when the Eiffel Tower was inaugurated.

The 20th century saw much movement towards Europe as a result of the Armenian Genocide, and also from the Middle East, as unstable regimes gave way to unfavourable circumstances in such places as Lebanon, Syria, Iran, Iraq, Egypt, Jerusalem, as well as Turkey. In recent years, Armenians from Armenia and elsewhere in the former USSR have likewise seen their numbers rise in Europe. Besides France, which has by far the largest and most organised Armenian Diaspora in the area, communities continue to be found in Portugal, Spain, Italy, Switzerland, Belgium, Holland, Britain, Germany, Austria, and Sweden, home to such people as chansonnier Charles Aznavour, comic Kev Orkian, and footballer Henrikh Mkhitaryan. Needless to add, individual Armenians are to be found in other countries in western and northern Europe as well, even without a church or community centre.

For more facts about Armenians in Western Europe visit these links from The 100 Years, 100 Facts Project:
Fact 4: The last Armenian king is not buried in Armenia.
Fact 21: Alexander Mantashev was one of the world’s wealthiest oil magnates and a major Armenian philanthropist of the early 20th century.
Fact 23: The first European coffee-shops were established by Armenians.

~~~
Reader Raffi Kojian of Armeniapedia.org writes: “Armenian Paper is not itself accordion-shaped, but flat. The user will often fold it into little accordions before burning, or else put it flat into a holder.

Auguste Ponsot discovered the burning of the styrax plant (benzoin) in Armenia. A product called Armenian Paper was being made at an Italian monastery for centuries already, and still is to this day. Ponsot and his business partner then took the styrax resin, infused it onto paper, and also called it Armenian paper, like the Italian one.

Check out the official Papier d’Arménie website for more.”

The team at The 100 Years, 100 Facts Project would like to thank Raffi for his feedback. 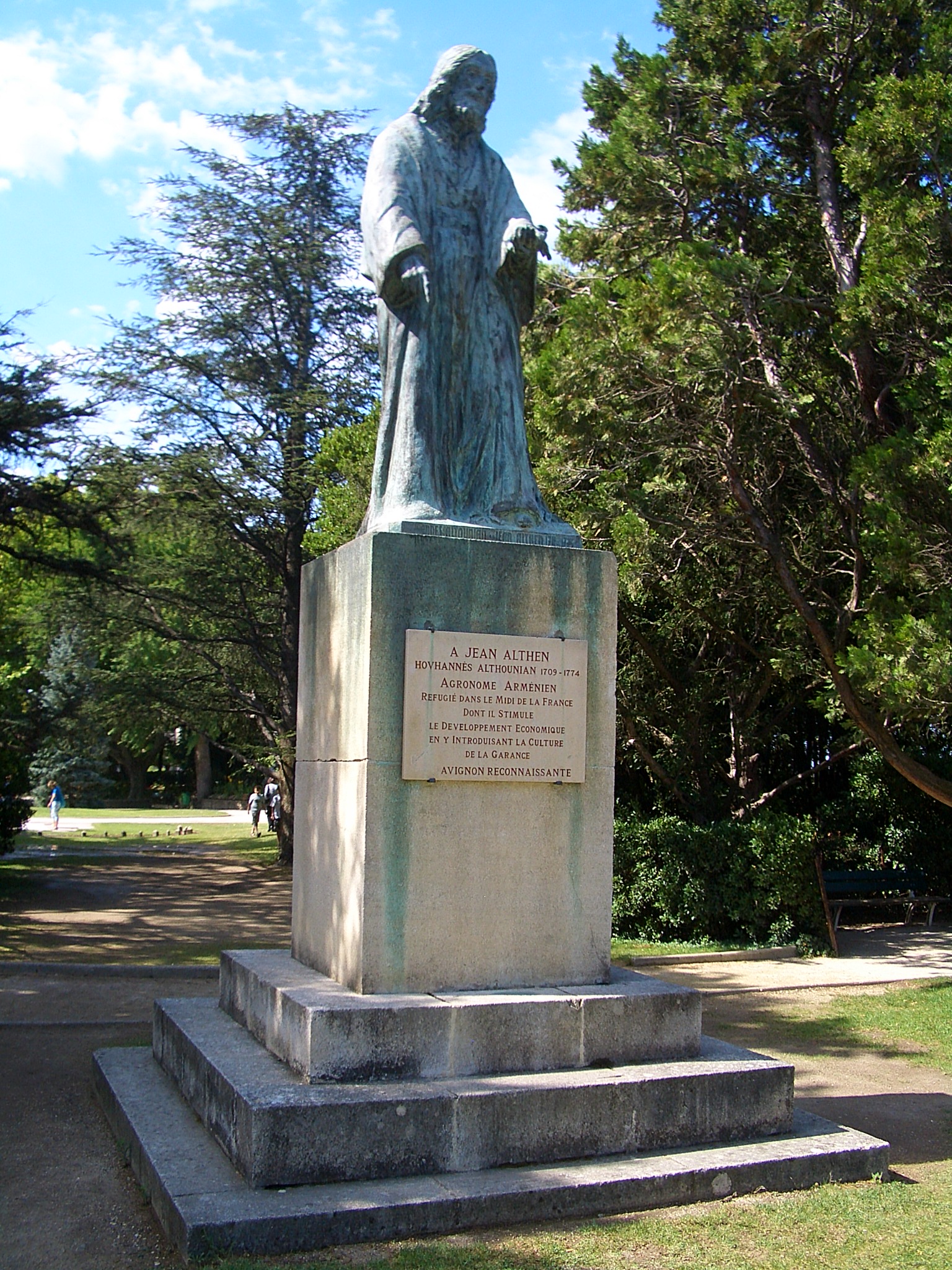 A statute in Avignon, a monument to Jean Althen – Hovhannes Althounian (1709-1774) – an Armenian agronomist who introduced a new dyeing technique, thereby boosting the economy in the south of France in the 18th century; a commune (district) of the country is named after him.

By User:Vmenkov (Own work (own photo)), via Wikimedia Commons