Part of Taksim Square in Istanbul used to be an Armenian cemetery.

The site of immense anti-government protests in the summer of 2013, Taksim Square is a central point in the European part of Istanbul. It serves as one end of the pedestrian shopping, sight-seeing, and entertainment street, Istiklal Avenue, while also hosting numerous hotels and restaurants in the surrounding area. A prominent monument to the founding of the Turkish Republic is found at one end of Taksim Square, leading up to Istiklal Avenue.

On the heels of popular rallies in public spaces in Cairo, New York, and elsewhere that had been subject of high coverage in the international media in preceding years, government plans for demolishing and developing part of the green area around Taksim Square, known as Gezi Park, sparked environmental activism in late May, 2013. They soon turned into general expressions of sentiment against a wide range of government policies. Sit-ins and demonstrations spread throughout the country, with reports of 11 people killed and thousands injured and arrested following crackdowns by the authorities as the “Occupy Gezi Park” movement continued over the summer.

But Taksim Square only started to become a central crossing of main thoroughfares in Turkey’s largest city in the 1930s. For almost four hundred years, meanwhile, the site formed part of the largest Christian burial ground in Constantinople: the Pangaltı Armenian Cemetery. As the story goes, a plot had been hatched to poison the celebrated 16th-century Ottoman Sultan, Suleyman the Magnificent, but his Armenian chef, Manuk Karaseferyan, did not go along with the plan and instead reported on the conspirators. As a consequence, he was granted a boon – an area for the Armenians to bury their dead.

Apart from the final resting places of many generations of Armenians since 1551, the Pangaltı Armenian Cemetery also held a monument to the victims of the Armenian Genocide, erected in 1919 (Check out the image accompanying our very first fact to see what it looked like). Neither graves, nor memorials survived the urban reconstruction in the decades that followed. However, 13 Armenian tombstones that were discovered during excavation works in July, 2013, testified to the past purpose of that area.

The protests eventually resulted in the development plans for the area being scrapped – but not without continued pressure from the Turkish government. Recently-appointed Prime Minister Ahmet Davutoğlu went so far as to call it “the world’s ugliest square”, especially compared to other well-known public spaces in such cities as Venice in Italy or Isfahan in Iran. Davutoğlu also referred to the former Armenian cemetery, as well as another violent public rally that took place there in 1977, during which over 30 people were killed.

The Armenian Genocide may have resulted most immediately in the outright massacre of individuals and families or their deportation, but it also involved the acquisition of goods and enterprises, land and property. That practice continued into the years of the Turkish Republic. Armenian groups have managed to bring to light the pieces of property that have been confiscated in the 20th century – such as those in Istanbul listed in a study by the Hrant Dink Foundation – some of which have been returned following legal action in recent years. New laws apply only to properties seized in or since 1936, however, so it would not be realistic to expect any part of Taksim Square to officially revert to its former use anytime soon. 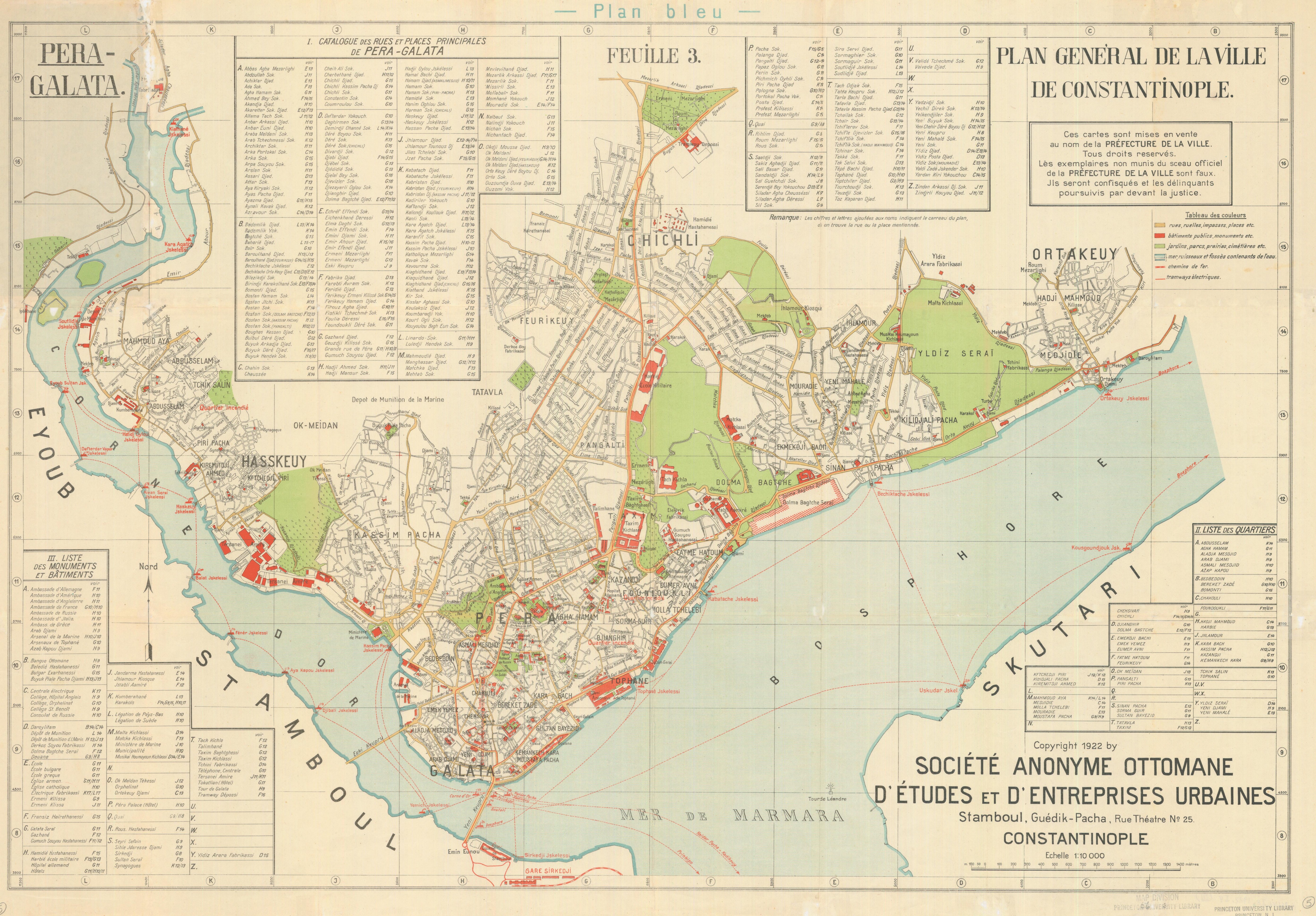 A detailed map of part of Constantinople dating from 1922, including the “Ermeni Mezarlighi” between “Pangalti” and “Taxim”, at one end of the “Grand rue de Pera” – Istiklal Avenue today.