Mount Ararat is a national symbol for the Armenian people.

There are a few particularly immediately-recognisable national symbols around which all Armenians rally, and Mount Ararat sits quite high on that list. At least that has been the case for the past two hundred years or so, ever since the Russian advances into the Caucasus incorporated into official imagery this highest mountain in the region – the taller of the pair towering over its surroundings at 5,137 metres or 16,854 feet.

The first documented climb up Mount Ararat took place in 1829, undertaken by an expedition team led by the German scholar Friedrich Parrot, accompanied by Khachatour Abovian, a Western-educated native of the Yerevan area noted for his literary accomplishments and for his pioneering work in developing modern, secular education in the vernacular (local language) of the Armenians of the Russian Empire.

Besides Abovian’s involvement (and subsequent mysterious disappearance) and later climbs by others, the hold of Mount Ararat in the popular imagination of Armenian society was reinforced over the course of the 20th century when the mountain featured on the coats-of-arms of two free Armenias and one Armenian Soviet Socialist Republic. It is also featured in the names and logos of countless public institutions and private companies in the country, from football clubs to brandy and wine factories, finding also a number of expressions in the Armenian Diaspora, be it a catering outlet in Buenos Aires or a street in the old city of Jerusalem. (Even The 100 Years, 100 Facts Project couldn’t resist including Mount Ararat in its own logo!)

The place of Mount Ararat in Armenian culture, however, goes back much further. The mountains of Ararat are where Noah’s Ark landed, after all, according to the Book of Genesis, thus affording Mount Masis – the Armenian name used alongside Ararat – a holy status. A piece of Noah’s Ark can be viewed in the museum of Etchmiadzin in the Ararat plain. The seat of the Armenian Church maintains that relic in accordance with the tradition of St. James of Nisibis and his climb and acquisition of it. The Ararat plain has been in truth the heartland of Armenian history, the location of many Armenian capitals and a fair number of decisive battles.

What makes Mount Ararat such a potent symbol for Armenians today is the fact that it is in Turkish territory – just across the border that was set by the Treaty of Kars of 1921 – but almost always dominating the skyline of the capital Yerevan. At the same time, an increasing number of groups including Armenians have participated in climbs up Mount Ararat in recent years. Meanwhile, the highest peak in the Republic of Armenia today – also very much a part of the view of the horizon of the capital – is Mount Aragats. That mountain actually consists of a volcanic cone surrounded by four peaks, the highest one at 4,090 metres or 13,418 feet.

A response from Robert Assarian (Southern California) on our Facebook page led to a careful reading of pages 196-197 of Friedrich Parrot’s memoirs, available in English online.

In it, Professor Parrot mentions the names of all six members of the expedition team that made it to the summit of Mount Ararat in 1829: Parrot himself, “Khachatur Abovian, deacon in Echmiadzin, son of an Armenian residing in Kanakir, near Erivan; Alexei Sdrovenko, of the 41st Yäger regiment; Matvei Chalpanof, of the same regiment; Ovannes Aivassian, a native of Arguri; and Murat Pogossian, of the same place” (translated by W. D. Cooley; Journey to Ararat by Dr. Friedrich Parrot, Harper and Brothers, New York, 1859).

There were thus four others on the summit besides Parrot and Abovian, among which two Armenians.

The team at The 100 Years, 100 Facts Project would like to thank Mr. Assarian for his feedback. 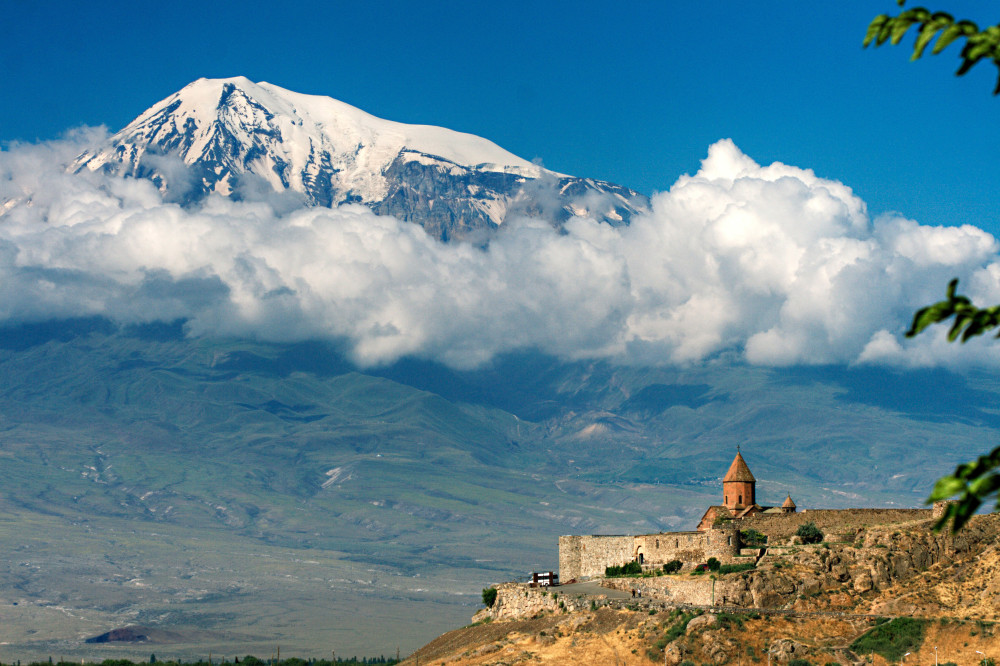 The bigger of the two peaks that make up Mount Ararat, with the monastery of Khor Virap in the foreground, right on the Armenian-Turkish border.