The First Armenian Republic was declared on the 28th of May, 1918.

The First World War and its aftermath was a period of immense upheaval for vast areas of the world, as the domains of the Hapsburgs, the Romanovs, and the Ottomans underwent fundamental change. The Armenian Genocide saw forced shifts in demography and politics in Anatolia and Asia Minor, all the way up to the southern Caucasus, which the Russian Revolution left by the wayside.

Although the peoples of that region had come together in a federation, that arrangement did not last as the independence of Georgia and Azerbaijan were declared amidst an advancing Ottoman army and a retreating Russian one. The Armenians were caught in the middle, and had it not been for what are remembered today as miraculous victories over Turkish forces in the battles of Sardarapat, Bash Aparan, and Gharakilisa in May, 1918, the Republic of Armenia could never have been declared.

As such, it was not declared a free, independent republic – at least not at first. The Armenian National Council in Tiflis (Tbilisi, the capital of Georgia today; it was the major city of the area at the time) went ahead and declared its intentions to take over administrative duties in the Armenian regions, officially proclaimed on the 28th of May, 1918. That was easier said than done, as the country was facing an influx of refugees from the Ottoman Empire, disease of vast epidemic proportions, as well as renewed war with its neighbours over the following months.

The 1918 Republic of Armenia barely lasted two years. It was, however, a historic political entity – the first expression of Armenian sovereignty since 1375. Its efforts led to the establishment of a Soviet Armenian republic, which, in turn, allowed for an independent Armenia upon the collapse of the USSR seventy years later. Although much can be said to criticise the policies of 1918 Yerevan, some things were also salvaged and put in place in spite of the heavy and harsh circumstances of the time.

The Republic of Armenia today carries on the legacy of its predecessor, certainly in terms of national symbols. The modern coat-of-arms is a modification of the 1918 one, and although the tricolour flag was adopted with some uncertainty and controversy back then, it remains the accepted symbol of the Armenian nation today, whether in the Republic or in the Diaspora.

As for the national anthem, the “Mer Hayrenik” (“Our Fatherland”), it has a longer pedigree, having been first a poem written in 1859 by Mikael Nalbandian, entitled The Song of the Italian Girl, which begins by invoking, “Our Fatherland …”. This piece was, in fact, an Armenian version of an Italian poem written a couple of years earlier, referring to that country’s wars for independence against the Hapsburgs of Vienna. It was later set to music and proved to be very popular indeed for a number of decades, being very much in the spirit of the Armenian struggles of that era. And so it was without hesitation that “Mer Hayrenik”, as it came to be referred, was adopted as the national anthem in 1918, taking up that role with independence in 1991 as well, although with some modifications of the lyrics. 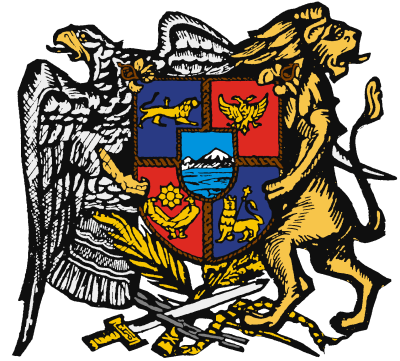 The coat-of-arms of the 1918 Republic of Armenia, designed by Tamanian and Kojoyan, adopted in July, 1920.