The first Armenian book was published in Venice in 1512.

Armenian writing goes back to the 5th century AD. After Mesrop Mashtots, there has been no stopping the translation of important works, nor the generation of original Armenian literature, poetry, history, or theology on manuscripts made of animal hide. Neither has there been any lack of engravings on walls of churches and monasteries (or graffiti scribbled on them), not to mention e-mails and text messages in the 36 or so letters of the Armenian alphabet – that last one admittedly a little bit more recently.

A huge turning point was the publishing of books in Armenian, on paper. About seventy years after Gutenberg developed the technology of printing with movable type, the very first book in Armenian saw the light of day in Venice in 1512. Out of thousands of languages, Armenian was the seventeenth in the world, and the second non-European language (after Hebrew), to be used for printing.

The first Armenian book was known as the Ourbatagirk (or Ourpatakirk in Western Armenian pronunciation), “The Book of Fridays”, a volume that contained prayers to cure disease, stories, and other writing, mostly religious in character. Magical incantations also form part of the book, including what should not be done on Fridays. The publisher, one Hakob Meghapart or Hagop Meghabard (“Jacob/James, Condemned for his Sins”), is an otherwise mysterious figure, although four more books published in Armenian within a year carry his name. It is interesting to note that the publication was made to look like Armenian manuscript handwriting – sort of how digital cameras still make shutter sounds, even though they don’t need to.

Also significant is that it was not until a whole century and a half later, in 1666, that the Bible was published in book form in Armenian, in Amsterdam this time. Early modern times was the era when the Armenian homeland, under Ottoman and Persian rule, gave way to the Diaspora in terms of development and technology, reflected in the wealth and activity of such centres as Isfahan, Constantinople, Venice, Marseille, and Amsterdam – communities led by the Armenian merchants carrying trade across the world. This was also an era when the Roman Catholic Church had very tight control over what got published, and what didn’t, hence the Armenian Bible’s appearance in Protestant Amsterdam.

A major figure in the history of Armenian printing is Mkhitar Sebastatsi (Mkhitar of Sebastia; Sivas in Turkey today), known also as the Abbot Mkhitar, who founded an Armenian religious congregation in 1700, the mission of which involved publishing and education. Due to his efforts and that of his students and the monks and priests who follow in those footsteps until today, it is yet Venice which can boast of having published at least one Armenian book every year since 1717 (with just six gaps in between).

2012 saw celebrations and markings of 500 years of Armenian printing both in the homeland, and Diaspora communities, and even internationally. Yerevan, the capital of Armenia, was selected by UNESCO as the World Book Capital for that year, the twelfth city ever to receive such an honour.

~~~
Reader David Lemon of San Jose, California, wrote in to clarify that Johannes Gutenberg might not have invented printing technology using movable type from scratch. As noted at http://www.outsidethebeltway.com/gutenberg-didnt-invent-the-printing-press/, it could be the case that Gutenberg merely served to modify the Chinese and Korean technology for the European world and popularise it there.

Mr. Lemon adds: “While it’s reasonable to guess that Gutenberg knew about movable type from East Asia, it’s quite possible he came up with the idea independently. He had the right technical background (he trained as a goldsmith, which would have taught him about the punch & matrix process he used to make metal type). I doubt we’ll ever know for certain either way. In any case, Gutenberg’s genius was pulling together a number of technologies to support a business nobody had considered before. Although, as far as we know, he did contribute a significant invention himself: the alloy he first used for metal type is very unusual in that it neither expands nor shrinks when it cools.”

The team at The 100 Years, 100 Facts Project would like to thank David for his feedback. 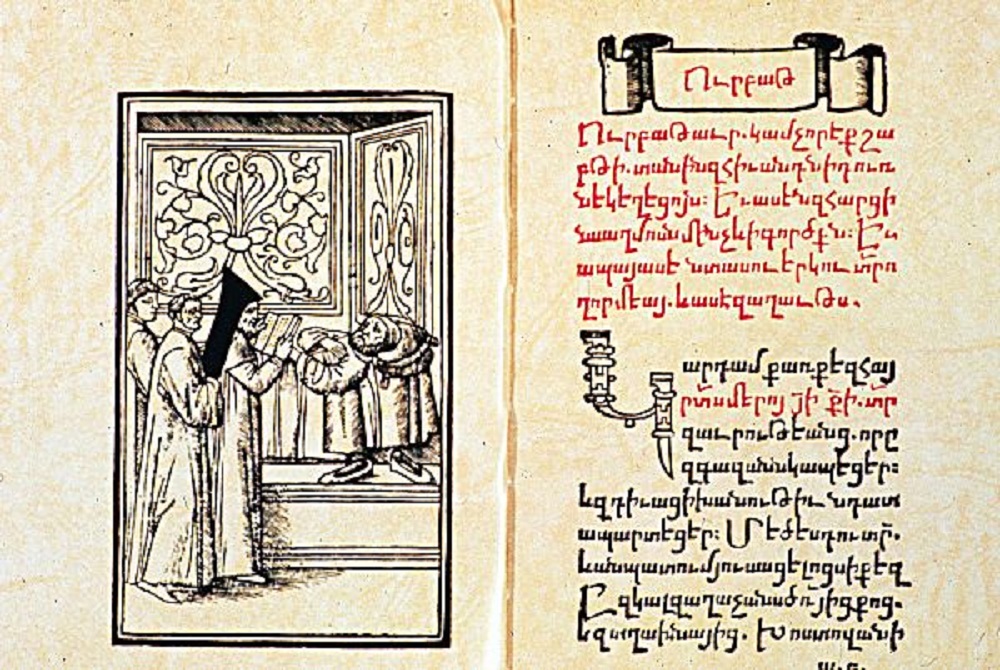 A page entitled “Ourbat/Ourpat”, “Friday”, from the first printed Armenian book; European woodcuts were re-used as illustrations, but this one was modified for the audience – the priest has been given a black, pointed hood, which forms part of the traditional garb of Armenian clergy.