Some Christian saints of the West trace their roots to Armenia.

The centuries following Jesus’s mission saw a few followers somehow tied to Armenia who are today celebrated outside the tradition of Armenian Christianity. Although their legacies are much more the stuff of legend than historical fact, their connection with Armenia makes for an interesting link, attesting to the pull of Christianity across what have often been difficult borders.

The earliest among these figures was St. Minas or Minias – San Miniato – who was by tradition the first Christian martyr of Florence, Italy. He is believed to have come from the east, as a merchant, soldier, or an Armenian prince, making a pilgrimage to Rome, and ending up as a hermit in Florence around 250 AD. He was asked to deny Christ by the Emperor, was subsequently tortured and decapitated. St. Minas, according to legend, picked up his head, replaced it on his body, and walked back to his mountain cave, the site of the Basilica of San Miniato al Monte today. While this story is not so well-known in Armenia, Minas is certainly a male given name still in use among Armenians.

A compatriot, if one may call him such, has a similar ending to his story, but farther north. St. Chrysolius the Armenian likewise picked up his head after being decapitated by Roman soldiers sometime in the 3rd or 4th century, while evangelising for the Pope in north-eastern Gaul. He is the patron saint of Komen in Belgium today.

A little less clear is the story of Saint Expeditus, a Roman soldier stationed by tradition in Armenia – in Melitene in the province of Armenia Minor, or Lesser Armenia; Malatya in Turkey today – who was martyred for his faith in the very early 4th century, around the same time that Greater Armenia was adopting Christianity. The name Expeditus (roughly “freed to move” or “released” in Latin) lends itself for him to be the patron of rapidity, to resolve matters of urgency – the saint who intercedes for sailors, for instance, or for students taking exams. Although the history behind Saint Expeditus is not as definite, he is still venerated in Western Europe and in Latin America. He is particularly popular in Brazil, where his feast day of April 19 attracts tens, if not hundreds, of thousands of worshippers.

Within the first decades of the 300s is the time-frame as well for the story of St. Blaise, also known as Blasius or Blase, and “Barsegh” in Armenian (“Parsegh” in Western Armenian pronunciation – a less common, but still a given name). From Sebastea or Sebaste (Sivas in Turkey today), St. Blaise was renowned as a healer and a bishop. As with the others in the area, he refused to renounce his faith in Jesus and was tortured and martyred by the Roman authorities. St. Blaise is particularly famous as the patron saint and protector of what used to be the Republic of Ragusa, now centred on the city of Dubrovnik in Croatia, where he is known as Vlaho. His veneration there is dated all the way back to 971 AD, following a vision of him appearing to warn inhabitants of danger. His feast day of February 3 involves great celebration in that city, and even included an Armenian clergyman a few years ago.

~~~
There are other Western saints with Armenian connections, such as St. Servatius. Author Annie Seropian, meanwhile, wrote in about the prominence in Italy of the evangeliser of the Armenians, St. Gregory the Illuminator.

Among other places where he is venerated in that country, San Gregorio Armeno is the patron saint of Nardò in Salento in the south of Italy (in “the heel part”). He is considered to have interceded to save the town during a terrible earthquake in 1743; his statue, in the town plaza, had turned in the direction of the epicentre, so the lack of destruction of life and property was attributed to him. Read more about that tradition at this link (in Italian) – http://www.terrarussa.it/9022/guida-salento/notizie/festa-in-onore-di-san-gregorio-armeno-a-nardo-nel-salento/.

Complementary to an Armenian patron saint, Nardò is twinned with Gyumri in Armenia as a sister city. There’s more basic information about Nardò on the Wikipedia page about the town – http://en.wikipedia.org/wiki/Nard%C3%B2.

Every year, Nardò celebrates St. Gregory the Illuminator between 18 and 20 February with religious and public ceremonies. Have a look at the video for the festival in 2014 at http://www.youtube.com/watch?v=5xPSOOW6350.

The 100 Years, 100 Facts Project would like to thank Annie Seropian for her contribution. (Annie Seropian is the author of Armenian Holiday Traditions: An Illustrated Guide for Children.) 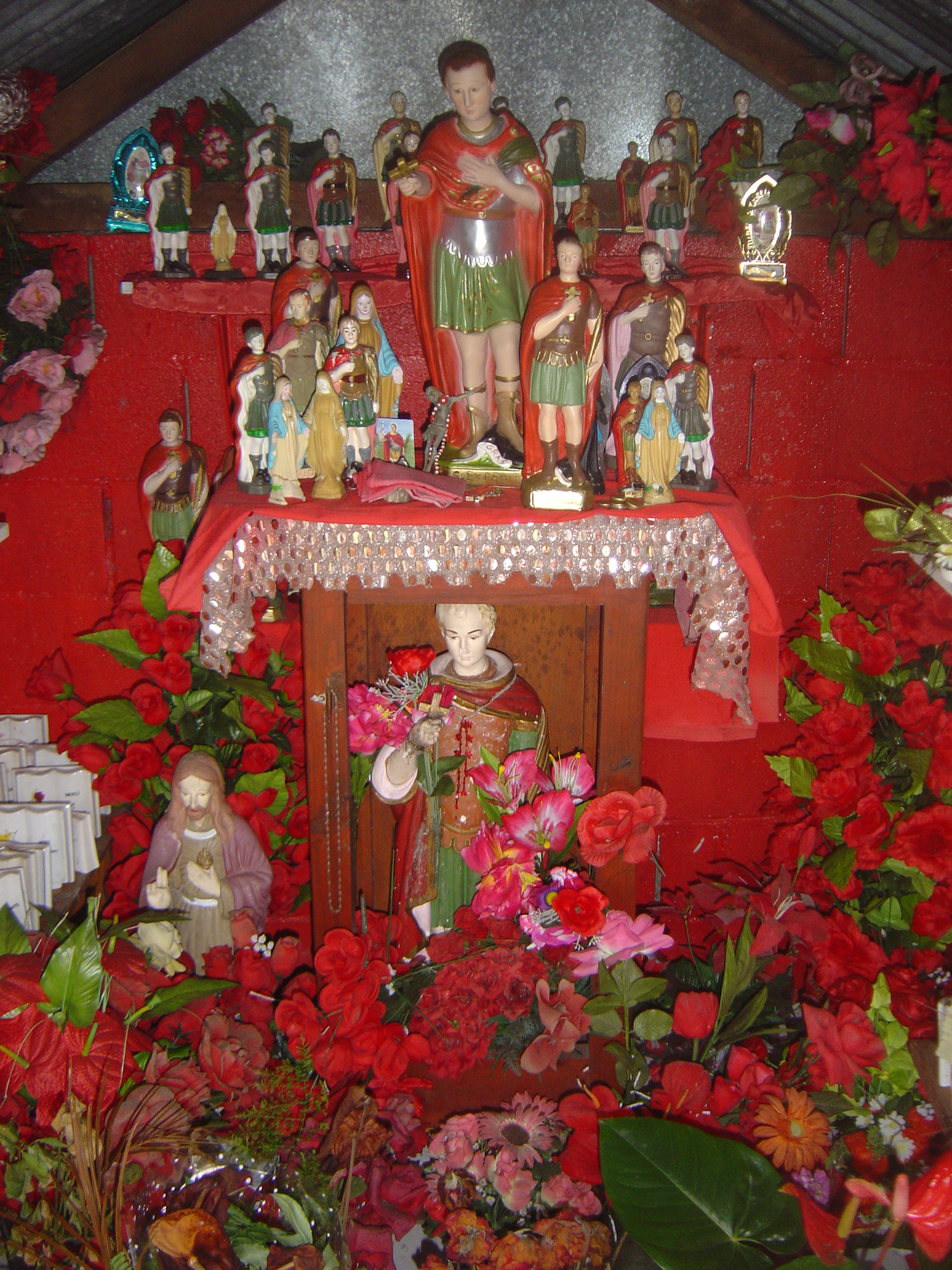 Statues of Saint Expeditus, an object of wide worship on the French island of Réunion, in the Indian Ocean, east of Madagascar.

By David Monniaux (Own work) [CC-BY-SA-3.0], via Wikimedia Commons