Aram Khachaturian’s Sabre Dance was featured in jukeboxes all over the United States in 1948.

One of the troubles with writing about music is the impossibility of conveying in words the power of an orchestral performance, such as those of the works of Aram Khachaturian. Ideally, the Sabre Dance would be blasting through the ears of the reader to introduce this Armenian musician, one of the most celebrated composers of the 20th century.

Khachaturian was born in 1903 in Tiflis in the Russian Empire (modern Tbilisi, Georgia), to an Armenian family originally from the Nakhichevan region (an exclave of Azerbaijan today). His youth saw the collapse of the reign of the Tsar and the establishment of the Soviet regime, which drew him to Moscow to further his musical education and to act as an exemplary artist within the ideology of communism. Aram Khachaturian was subsequently marked as a man who took folk music and transformed it into a more majestic, classical form, still maintaining its accessibility to the people. Certainly his works are filled with Armenian themes, as well as with musical elements from the Caucasus and Central Asia taken more broadly. He was also known for some more avant-garde work – what we might perhaps call “fusion music” today – such as the Sabre Dance mentioned above.

That and other parts of his Gayane ballet, as well as movements from Spartacus, another ballet composed by Khachaturian, comprise his most recognisable works, as they spread from the Soviet stage of the 1940s and ’50s to popular recordings and covers in the West – including standard fare in the jukeboxes of the US in that era – with use as well in films, theatre, advertisements, and cartoons in the decades that followed, right up to today. Khachaturian himself also composed film music, and also concertos and solo works for the piano, cello, violin, and other instruments.

Alongside Sergei Prokofiev and Dmitri Shostakovich, Aram Khachaturian was at one time the darling of the world of Soviet music and the promotion of the culture of the USSR abroad. However, just as with them, he had to face official public condemnation by the Communist Party in the late 1940s (for allegedly composing “anti-people” music), which lasted until the death of Stalin in 1953 and the revisions of his policies. Khachaturian remained popular as a composer afterwards, although the works he is remembered for most today were written before that bump in the road.

Aram Khachaturian died in Moscow in 1978. Although living and working in Russia for most of his life, Khachaturian is remembered as an iconic Armenian cultural figure. The capital Yerevan has a major concert hall named after him, with a monumental statue by its entrance, besides also maintaining an Aram Khachaturian museum. His body was brought to Armenia for burial in the national pantheon, where numerous public figures have their final resting place. Aram Khachaturian’s composition for the Soviet Armenian anthem is also still remembered as an inspiring piece of music; more than once, in fact, have there been public calls to replace the current Armenian national anthem with that one – stripped of its communist-era lyrics, of course. 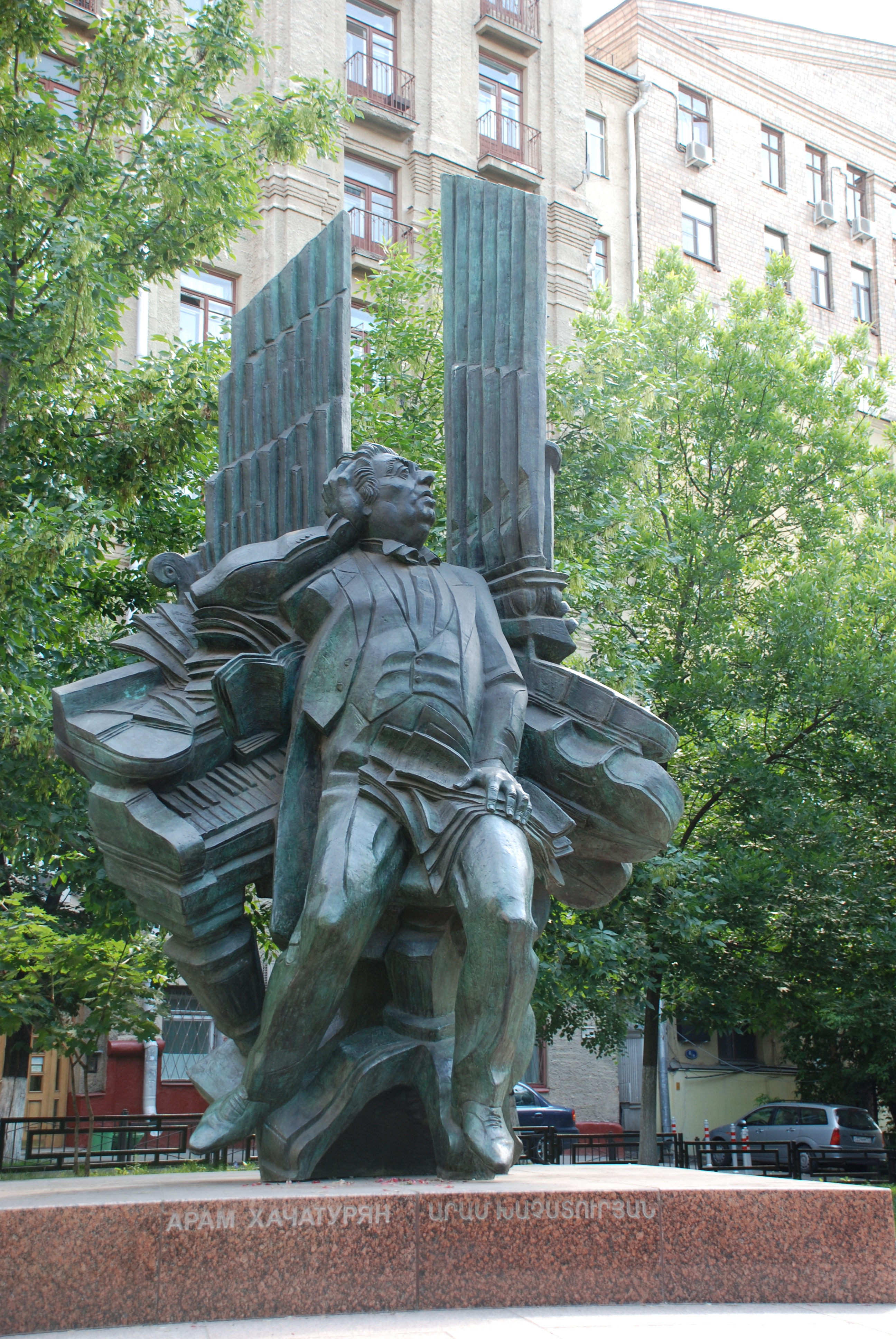 Monument to Aram Khachturian near the House of Composers in Moscow, by Russian-Armenian sculptor Georgiy Frangulyan.

By Anstarrr (Own work) [CC-BY-SA-3.0], via Wikimedia Commons