Manoogian Mansion is the official residence of the Mayor of Detroit.

There are a handful of names that are to be found over and over again across various communities of the Armenian Diaspora, whether in the names of schools in Montréal, Buenos Aires, Tehran, or Sydney, or in the list of benefactors of churches or other community establishments in all those places and more, not to mention in the Republic of Armenia itself. The name of Alex Manoogian is perhaps the highest on that brief list.

The Manoogian family was in the wholesale grain business in Smyrna, in the Ottoman Empire (Izmir, Turkey today), where Alex – often rendered “Alec” in Armenian – was born in 1901. Following the Armenian Genocide but before the horrors reached his native city, Manoogian arrived in Connecticut by way of Ellis Island in 1920, ending up in Detroit, Michigan by 1924. His was a classic American Dream story: venturing to the New World with just a few belongings and plenty of spirit. And the dream did come true, as, working first in the auto industry, he co-founded and later led what became Masco Corporation.

The big break came when he had the chance to perfect the design of the Delta faucet – the kind installed over countless sinks today, which can be used with one hand for both hot and cold water. This was a revolutionary product for 1954, and Masco benefited immensely from it. What was already a growing business thrived and expanded its operations, continuing to be a major player on the home furnishings market today.

Besides engineering and entrepreneurship, Alex Manoogian was a major philanthropist, both in his adopted home country and for his own people. He gifted his home in 1966 to the City of Detroit, which uses the Manoogian Mansion, as it has come to be called, as the official residence for the mayor. Funding from the Manoogian family has also made its way to numerous public institutions, especially in Michigan, such as Wayne State University. Alex Manoogian has been recognised for his efforts on more than one occasion, receiving, for example, the Ellis Island Medal of Honor in 1990 – a decoration meant for Americans of various backgrounds who have made significant contributions to the United States.

Above all, Alex Manoogian’s efforts were aimed towards the Armenian-American community and the Armenian Diaspora. He served as president of the Armenian General Benevolent Union (AGBU) for 36 years, during which the work of that major Armenian cultural and educational organisation spread across new and developing communities, founding and consolidating such central institutions as schools and churches. In Armenia itself, there is a major road named after Manoogian in the capital, Yerevan. The Republic of Armenia also bestowed the title of National Hero upon Alex Manoogian in 1995. He was a major benefactor of the Mother See of Etchmiadzin, the Treasury Museum of which – built in 1982, during Soviet times – carries the Manoogian name.

Alex Manoogian passed away in Detroit in 1996, and was later re-interred with his wife, Marie, with full honours at Etchmiadzin in 2007. 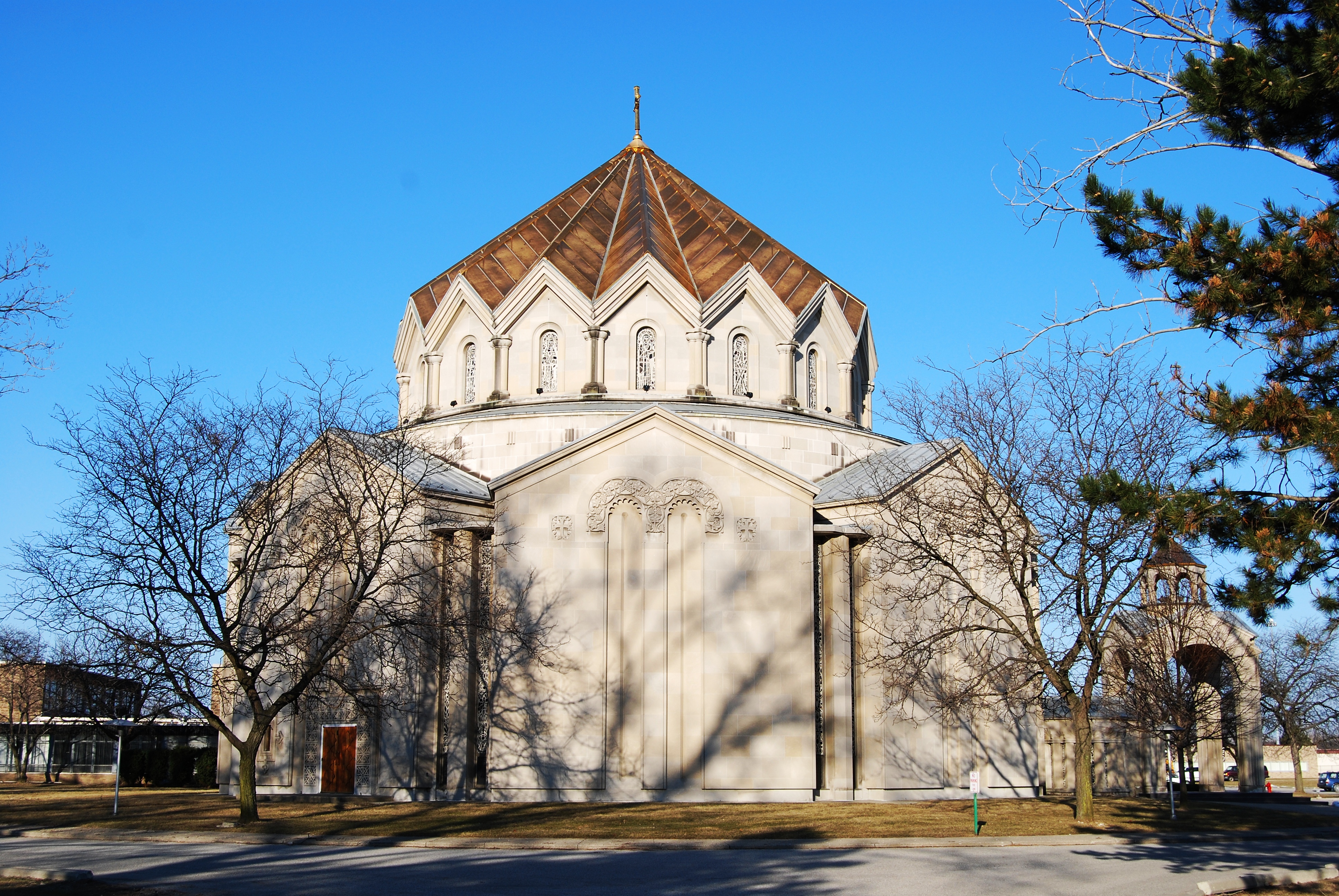 St. John Armenian Church, in Southfield, Michigan – one of numerous Armenian churches to have been funded by the Manoogian family

By Dave Parker (Own work) [GFDL or CC-BY-3.0], via Wikimedia Commons