Chess is considered a national sport in Armenia.

Sure, many in the US may live off baseball, basketball, and American football, while Canada has its hockey. India and a lot of the Commonwealth have cricket, while football (soccer) features high on the list of followed sports in many, many parts of the world – including, it is true, in Armenia. But Armenia is also a place where chess occupies its own very special spot.

The history of chess in Armenia goes back over a thousand years: it is thought that it was introduced during Arab rule in the 8th-9th centuries AD, the Arabs having, in turn, brought it over from India. It was not until Soviet times, however, that the game was given a boost to the national level. The 1920s and ’30s saw the first chess clubs and championships take place in Yerevan and elsewhere in the country.

During the 1960s, with the prominence of Tigran Petrosian, chess became a highly popular, followed sport in Soviet Armenia. Petrosian got to be Soviet chess champion four times, and also won the world title in 1963, besides securing many victories as part of the USSR team. Chess, as it turned out, was rendered an institution unto itself. One could say that the rest is history – but the truth is that the game is very much in the present in Armenia.

Another big name in chess is Garry Kasparov, who gained international renown as the Cold War was coming to an end, and later in playing chess against a computer, and today as a public figure in Russia. Kasparov was born in Baku, in Soviet Azerbaijan, to an Armenian mother, and had to flee his native city due to his background as the Nagorno-Karabakh movement came to a head. He never represented Armenia in the world of chess, however.

Armenia continues to figure very actively on the chess scene, hosting international tournaments, and sending individuals and teams to display the national chess prowess all over the world. It helps that the Chess Federation of Armenia is headed by the current president of the country, receiving much official support, whether in terms of men, women, or underage players. Armenia also made headlines when it decided to introduce chess into the school curriculum in 2011. The rankings of Armenia at the individual and team level have been consistently high – an impressive feat, especially given the small size and population of the country.

One of the most interesting aspects of chess in Armenia is the same degree of a following that it enjoys as one would expect of bigger, more commercialised sports elsewhere. While Tigran Petrosian was a household name a few decades ago, Levon Aronian is a national celebrity in Armenia today, alongside a number of other Grandmasters, many of them young, and other up-and-coming players. A magazine devoted to chess has been in publication since 1972, which was the same year a chess TV show began, on air ever since. 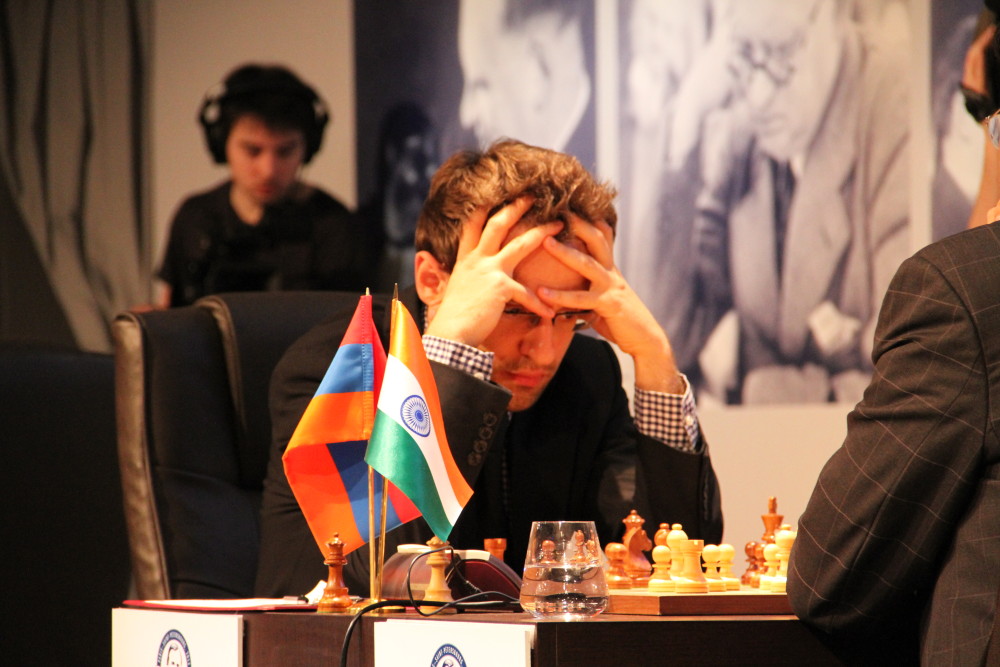 Levon Aronian (up against Indian chess powerhouse Viswanathan Anand) during the Alekhine Memorial 2013; Aronian won the tournament that year.